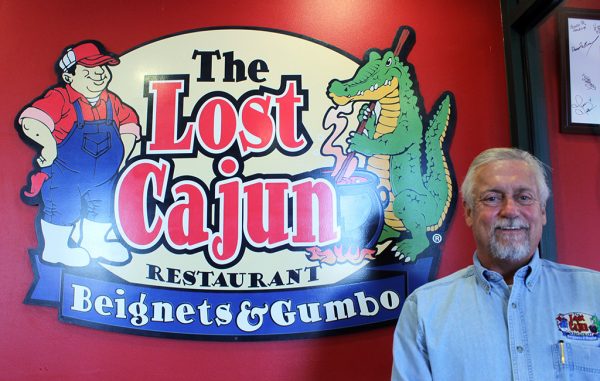 Greg Jones at The Lost Cajun in Littleton, which he opened in 2016. (Kailyn Lamb)

Aurora is next in line to get food that Greg Jones calls “straight out of the swamp” – that is, traditional Louisiana cooking.

Jones, who opened The Lost Cajun restaurant in Littleton in 2016, is planning to launch a second location at 6105 Main St. in Aurora by Feb. 3, which is Fat Tuesday.

The Frisco-based restaurant chain, founded by Raymond Griffin in 2010, has 12 locations, including spots in South Carolina, Texas and Tennessee. Jones signed a franchise agreement in February 2016 to open four locations in the southern part of the Denver metro area.

The new Aurora restaurant isn’t the only thing on Jones’ plate. Separate from his franchise agreement, he’s also taking over The Lost Cajun in Glenwood Springs.

“We’re having two babies in January, so to speak,” he said.

The restaurant has been closed this month and will reopen Jan. 2. Jones said the biggest challenge would be rebuilding the brand locally in the wake of the previous owner.

A Louisiana native who previously worked as an accountant, Jones moved to Colorado in 2015. For years, he said, he rarely ate Cajun food outside of the South, because he didn’t expect high quality.

Then, he said, his son “dragged” him to The Lost Cajun in Breckenridge, the company’s second store. He was hooked.

Jones said it takes between $200,000 and $400,000 to open a franchise, and that he’s funding the new Aurora restaurant with profits from the Littleton location.

He plans to continue using that system to open his other two restaurants in the Denver metro area, with the goal of taking on little to no debt. Ultimately, Jones hopes to go beyond his original franchise agreement and run between 20 and 25 restaurants.

“I’m planning on doing as many as they’ll let me,” he said.

Greg Jones at The Lost Cajun in Littleton, which he opened in 2016. (Kailyn Lamb)

Aurora is next in line to get food that franchisee Greg Jones calls “straight out of the swamp” - that is, traditional Louisiana cooking.