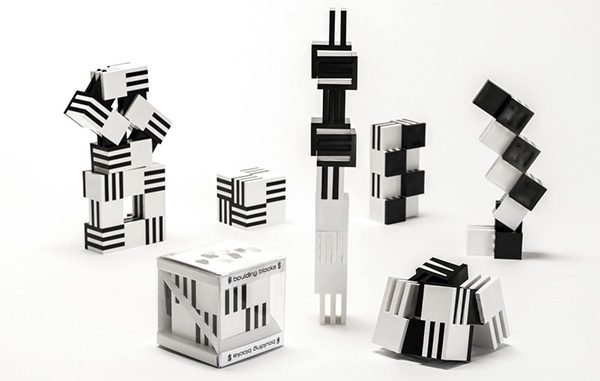 The puzzle has eight pieces, with prongs that line up with the other pieces or slide apart to create negative space. (Boulding Blocks)

Mark Boulding is trying to give the Rubik’s Cube a run for its money.

The 68-year-old Englewood artist has designed a cube puzzle made from eight pieces, with prongs that line up with the other pieces or slide apart to create negative space.

Boulding said the four black and four white pieces can be put together in three ways to form a cube. Multiple sets of Boulding Blocks can be used to make larger and more complex sculptures.

“Unlike the Rubik’s Cube, which has a very high number of variations … this has an infinite number because it slides,” he said.

Boulding first began building cubes with bricks for an art series, then decided smaller pieces could be used to make a puzzle.

He said visits to Museum Store Association Conference and the New York Toy Fair helped him build a network to sell the product. Boulding Blocks have been sold locally at the Denver Art Museum and Denver Botanic Gardens, and online at Amazon.

The product retails for about $20.

The puzzle also caught the attention of the Museum of Modern Art in New York, which will handle distribution of the product come February.

The pieces of each shape are compatible, and puzzles can be combined to make square and sphere hybrids.

Boulding also envisions a future where his product is scaled up.

He hopes to put together a larger line of pieces that can be used to make furniture, such as chairs, beds and tables. He is looking for investors to help fund the idea, and then hopes to pitch IKEA.

The puzzle has eight pieces, with prongs that line up with the other pieces or slide apart to create…