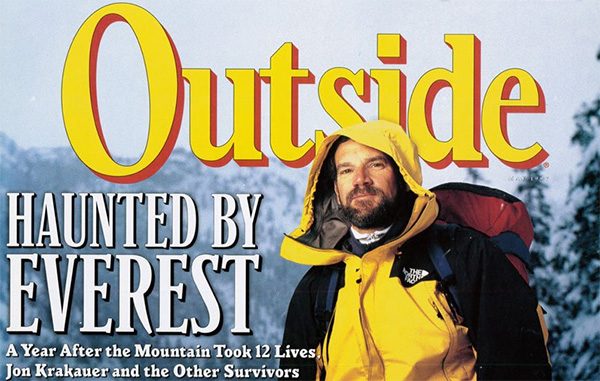 Colorado’s own bestselling author John Krakauer last week sued Outside Magazine after it republished online his 20-year-old article about a deadly expedition on Mount Everest.

Krakauer filed a copyright infringement suit in November against Mariah Media Network LLC, which publishes Outside. He claims the magazine republished his “Into Thin Air” article on its website in September 2015, breaking the copyright agreement.

“Into Thin Air” first was published in the print edition of Outside in September 1996. The article follows Krakauer’s journey up Mount Everest and a storm that stranded and killed eight mountaineers. He published a book on the events with the same title in 1997.

“MNS’s publication of ‘Into Thin Air’ on Outside Online violated Mr. Krakauer’s exclusive right to reproduce that copyrighted work,” the suit says.

The suit says a large portion of Krakauer’s income comes from books and magazine articles, and that he is entitled to profits from views of “Into Thin Air” on Outside’s website. The suit included a list of Krakauer’s other articles and books, saying the author has the exclusive rights on republications of those works as well.

Krakauer, who lives in Boulder, could not be reached for comment. The suit was filed in U.S. District Court. William D. Meyer and Colleen M. Koch of Boulder law firm Hutchinson Black and Cook filed the suit on behalf of the author. They did not respond to requests for comment.

Krakauer is asking for damages and wants to prevent Outside from digitally republishing any of his other works.

Outside Magazine did not respond to a request for comment.

Boulder's own bestselling author last week sued Outside Magazine after it allegedly republished online his 20-year-old article about a deadly expedition on Mount Everest.