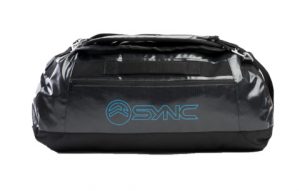 Ski racing is not for minimalists – it requires a trunk full of gear.

But a Vail-based outdoors brand hopes to make transporting the tools of the trade a little less clunky.

Sync Performance has sold $7,000 of rolled ski bags and duffel bags so far in a Kickstarter crowdfunding campaign.

“We’ve had good success with Kickstarter in the past,” CEO Phil Shettig said.

“It’s more a go-to-market pre-sales and marketing platform. When the product does come, it’ll be available on our website. It’ll have quite a bit of momentum already.”

Shettig said Sync is an official supplier for the Canadian ski team, World Cup ski racers and members of the Austrian and American teams.

“There is a real opportunity in the market to focus on this alpine ski racing sport,” he said.

In 2015, the company launched a series of stretchy puff jackets on Kickstarter. Now the company is moving into products that lessen the hassle of schlepping ski equipment from race to race.

“They are typically carrying unbelievable amounts of gear,” Shettig said.

Not to mention the boots.

“As these athletes and any skier who is traveling to compete or go on vacation know, everybody is going to bring their ski boots,” he said. “It can be tiring. From an athlete’s perspective, ‘let’s put wheels on this thing.’ That’s how we came up with the boot roller.”

If athletes forego the boot roller, they can haul gear in waterproof duffels that come in two sizes and have adjustable backpack straps.

Shettig said the company will produce 1,000 duffels and 500 rollers in its first product run.

Sync employs six people in its 800-square-foot office at 3971 Bighorn Road in Vail.

The 4-year-old outdoors brand hopes to make transporting the tools of the trade a little less clunky.