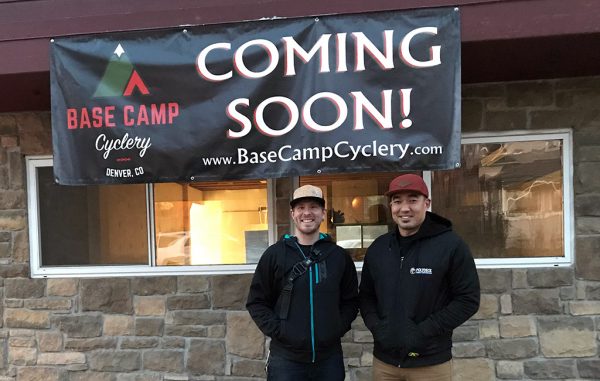 Harley McClellan and Sam Durnavich raced mountain bikes in the Leadville 100 together in 2015. Now they’re embarking on another sort of bumpy adventure.

The pair of 38-year-olds met 10 years ago at the recently shuttered Singletrack Factory bike shop on South Gaylord. They wanted to find a location that felt familiar to the quaint neighborhood.

“We did look at some places on South Broadway, where obviously it’s a huge artery,” McClellan said. “You’re going to get tons and tons of drive-by traffic, but I think it detracted from (being) a small business local bike shop.”

Base Camp, set to open its roll-up garage in January, will carry bike accessories, retail and rental bikes and include a repair shop. True to the interests of its hardcore bike-racing owners, it also will provide rentals and equipment for “bike packing” – overnight mountain biking in the backcountry.

The shop will sell and rent out lightweight bike packs, sleeping bags and camping equipment. It aims to have a backcountry aesthetic, with outhouse-themed bathrooms, aspen trees and Montana Ghost Wood siding, and outdoor-related gifts.

“We want an inviting space,” McClellan said. “When you walk in, you’re not going to get punched in the face with a bunch of product.”

McClellan, who moved to Denver from New Orleans in 2004, worked at the Singletrack Factory for 10 years before it closed in September. While employed there, he met longtime customer Durnavich, who is from West Virginia and graduated from Virginia Tech.

The pair first thought they’d take over the Singletrack Factory when the owner made plans to move on. When that deal deflated, they decided to set down roots on South Pearl Street.

South Denver is home to another bike shop, Campus Cycles, located a half mile south of Base Camp on Evans Avenue.

The most challenging part of the bike business is competing with the internet for sales, McClellan said.

“There are 60-plus bike shops in Denver. The pricing online drives the retail establishments basically to fight each other,” he said. “I have to provide a better customer experience.”

McClellan and Durnavich want to expand beyond retail and rentals into mountain bike guiding, especially for visitors looking for a Front Range trail.

“We have a two-year goal of being what we call ‘front-country guides,’” Durnavich said. “We’ll take you to a nearby trail, or tell you where to go and outfit your bike for you, and you come back to your JW Marriott hotel and go to your steak dinner.”

Harley McClellan and Sam Durnavich raced mountain bikes in the Leadville 100 together in 2015. Now they’re embarking on another sort of bumpy adventure.