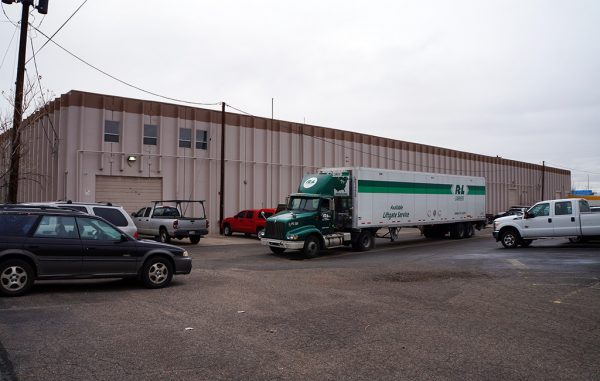 The City of Denver purchased the warehouse at 2601 W. Seventh Ave. for $3.8 million. (Thomas Gounley)

One year and one lawsuit later, Denver finally has its warehouse.

The adversary and now seller was 2601-2605 W 7th Ave LLC, which purchased the 1.3-acre property in August 2014 for $2.3 million. The entity’s principal is Bret Kaup, who has a woodworking business on the property.

Denver City Council originally approved spending $4.1 million to purchase the property in September 2016, with plans to use a portion of the building as an emergency homeless shelter. It hoped to open it by January 2017.

Things got complicated well before then.

On Oct. 13, 2016, Kaup terminated the purchase agreement, alleging the city missed the deadline to pay $75,000 in earnest money, according to court records. Denver deposited the funds that same day, and countered that Kaup was misreading the terms of the contract, and that it had met the deadline.

The city was supposed to deposit the money within seven business days of the execution of the contract. Five city leaders needed to sign the contract.

The city said in court records that it asked Kaup to recommit to the purchase agreement after the termination, but he countered by asking the city to pay more, which it declined to do. The city said Kaup’s attorney Jack Tanner then told the city Kaup wasn’t interested in pursuing the sale further.

The city sued the ownership LLC for breach of contract in December 2016.

In the lawsuit, the city says Kaup may have wanted to back out of the deal because plans to relocate his woodworking business, Unique Woodworking, to another site had fallen through. The purchase agreement called for the business to lease back a portion of the space on West Seventh Avenue after the sale.

The lawsuit progressed in the city’s favor this year, with the ownership LLC appealing a denial of its motion to have the case dismissed. That appeal was denied.

Earlier this month, the parties notified the court that they had reached a settlement agreement.

Kaup and attorney Tanner did not respond to requests for comment.

Courtney Law, spokeswoman for the city’s finance department, confirmed the agreement included the sale of the property. She said the seller is leasing back the property for six months.

It’s unclear if the building will become a shelter.

“At this point, the city is still evaluating its needs and no decisions have been made,” Law said.

The City of Denver purchased the warehouse at 2601 W. Seventh Ave. for $3.8 million. (Thomas Gounley)