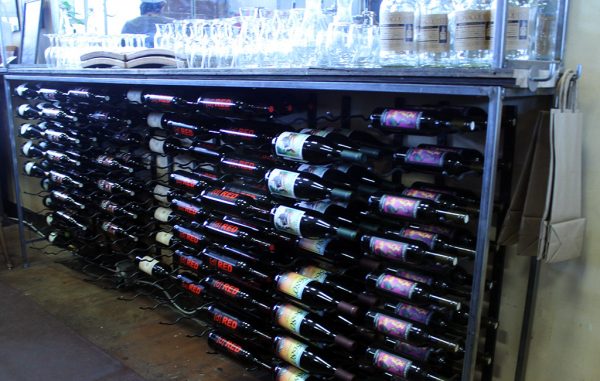 The wine cellar is making a bold move out of the basement.

Denver-based VintageView Wine Storage Systems recently received a patent for a wine rack that allows users to see the labels on the bottles right up front. Customers include homeowners and restaurants looking for an easier way to find that perfect Malbec for the occasion.

Marketing director Jacob Harkins said the recent patent is one of many refinements on the original front-facing wine rack from when the company launched in 2001.

“It’s been part of a really big trend, where wine cellars are no longer cellars, they’re in living rooms, they’re in entrances to restaurants. They’re a design piece,” Harkins said.

“(The patent) gets really nuanced in terms of neck and base, but the idea is basically we have the patent on putting a bottle of booze sideways,” Harkins said.

He said traditional wine storage for sizable collections can be difficult to search through. Without seeing the label, oenophiles have to lift individual bottles until they find the right one.

“It never bothered me until I knew there was a better way,” Harkins said.

He said VintageView has a half-and-half split between residential and commercial orders. Wineries such as Bonacquisti Wine Co. at 4640 N. Pecos St. in Denver use the racks to display bottles prominently behind the bar.

The racks come in pre-made models, but the company can make custom designs for customers.

The racks are produced in China, and the firm ships all North American orders out of Denver. The Denver office for VintageView is mostly for administrative staff and storage. Harkins said the company also tests new products in Denver.

The company launched a Grain and Rod line in August and is planning on launching wine lockers in January.

Harkins said that in two years, VintageView has expanded from nine employees to 17, and likely will hire another three to four people by January. The increase means the company will move to a larger nearby location in May, he said.

The racks can be found at Colorado wineries including The Winery at Holy Cross in Canon City and Bookcliff Vinyards in Boulder. Many of Frank Bonanno’s restaurants in Denver also use VintageView’s racks, as well as RiNo’s Bar Helix.

Marketing director Jacob Harkins said "the idea is, basically, we have the patent on putting a bottle of booze sideways.”