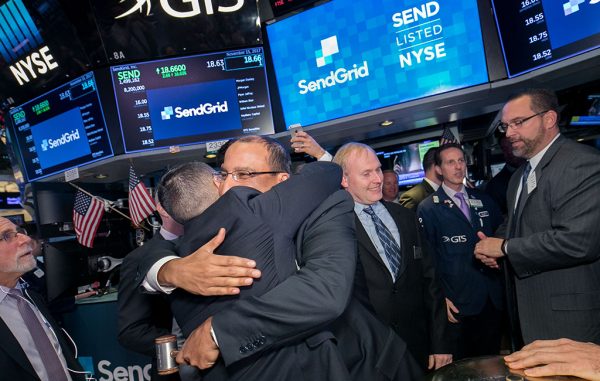 Denver-based SendGrid’s stock jumped on its first day as a public company.

Shares of SEND, trading on the New York Stock Exchange, closed at $18 on Wednesday, 12.5 percent above the price the shares were offered at.

SendGrid said earlier this month that it planned to sell 7.7 million shares, priced between $13.50 and $15.50 per share. Prior to going public, it increased both those figures, ultimately offering 8.2 million shares at $16.

The company raised $131 million with the initial public offering.

“The process is always challenging, but it’s an exciting time for SendGrid,” Chief Marketing Officer Scott Heimes said Wednesday. “Our momentum is increasingly strong as a company … our customer base continues to grow.”

With 415 employees working from its 72,000-square-foot headquarters at 1801 California St., Heimes said, the IPO won’t change the company’s local footprint much.

After opening its first international office in London last year, SendGrid is looking to expand more internationally, especially with 37 percent of the company’s revenue coming from overseas.

“The Asia Pacific and Latin America are two areas that make a lot of sense for us,” Heimes said, adding the company has no firm plans for new offices yet. “We’ll continue to invest and evolve in Europe.”

The 9-year-old firm is not yet profitable, reporting a net loss of $4 million in 2016 on $80 million in revenue, according to a regulatory filing.

“We’ll continue serving our 58,000 customers,” Heimes said. “We’re really focused on an IPO being just one milestone … It’s just one day amongst a long journey for SendGrid.”

SendGrid is one of a handful of Colorado tech companies to go public in the last few years. Here’s how other members of that class performed on day one:

Shares of SEND, trading on the New York Stock Exchange, closed 12.5 percent above the price their initial offering price.