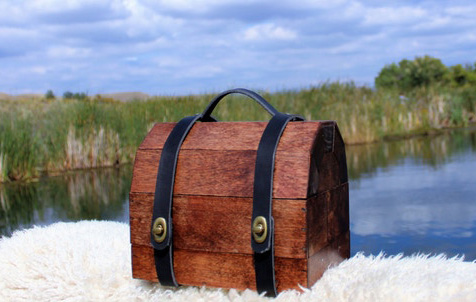 A Denver couple is making it easier for gamers everywhere to prepare for battle.

Matt Weiss and Elsa Fluss are the husband-and-wife team behind a successful Kickstarter campaign for the Mimic Chest, an all-in-one dice holder and rolling tray for those who play roleplaying games.

Fluss, 36, said the couple frequently plays Dungeons and Dragons and other roleplaying games, and wanted an easy to way to transport the necessary dice, cards and pens. While there were some carrying case options, she said, they lacked elegance.

Weiss, 34, tinkered in his woodworking shop to come up with a solution. He made his first designs on the computer in January, following up with a physical prototype. The pair refined the design to the current Mimic Chest model.

“We were like, ‘You know what, let’s just do it,’” Fluss said. “Let’s jump in with both feet and do the Kickstarter to see if people like it as much as we do.”

The chest measures about 6 inches by 7.5 inches by 4 inches when fully assembled. The basic version is made with plywood, nylon straps and a wool-felt lining and costs $100, Fluss said. 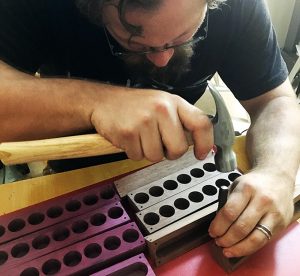 The pair also offered higher-quality options for the Kickstarter. The premium chest, which costs $200, is made with leather straps and suede lining. Buyers also can choose from different woods, including walnut and maple.

The wooden pieces that form the chest are lined with hand-placed magnets, which allow users to disassemble it into a tray with a dice-rolling tower. Other pieces on the chest hold dice and cards.

“Everything that we make we want to make sure that it serves a bunch of purposes, and has moving parts and you can use it in a whole bunch of different ways,” Fluss said.

Weiss hand makes all the chests, while Fluss handles customer service and marketing.

The two created a brand for the Mimic Chest, Polymorph Crafts. Both names were influenced by Dungeons and Dragons. Fluss said that they would continue creating products for Polymorph.

Both Weiss and Fluss work full-time jobs, but Fluss said the end goal is to have Weiss make products for Polymorph full time. For now, he will concentrate on fulfilling the Kickstarter orders.

“We made sure that we budgeted into all of our projections and the price and everything that Matt could quit his job for however many months to build all of the ones that we sold,” Fluss said.

The couple will continue to sell the Mimic Chest online after the crowdfunding campaign. Fluss said they will go to small conventions, such as Starcon, to market the product, and may work with smaller gaming stores around Colorado to sell the chests.

It took Matt Weiss and Elsa Fluss just 24 hours to collect $25,000 in crowdfunding pledges for their boardgame carrying case inspired by Dungeons and Dragons.