“The bank is not a part of the bankruptcy and will continue to operate without interruption as it always has,” Sprengle said.

“There are no financial difficulties on the part of the bank,” he said, adding that customers “can be assured that their deposits continue to be insured to the FDIC limits.”

The holding company is headquartered at 700 17th St. in Denver and led by CEO Scott Jackson.

Colorado National Bancorp, originally known as Community Bank Partners, has its roots in the recession.

The Denver Post in 2009 reported Jackson expected a wave of bank failures due to the downturn. It said he hoped to raise $30 to $40 million and strike deals to acquire about $300 million worth of troubled banking assets.

Community Bank Partners reached a deal in 2009 to acquire Palisades National Bank, although Jackson told the Post it wasn’t a troubled bank.

Sprengle said the holding company did not make any further acquisitions. Community Bank Partners changed its name to Colorado National Bancorp in late 2011.

Colorado National isn’t the first local holding company to file for bankruptcy in preparation for a sale.

Big Sandy Holding Co., the onetime parent of Longmont-based Mile High Banks, announced in September 2012 that it planned to file for Chapter 11 bankruptcy protection ahead of a sale to Texas-based Strategic Growth Bancorp Inc.

Among the creditors in the Colorado National Bancorp bankruptcy filings are these individuals and entities with a Colorado address: 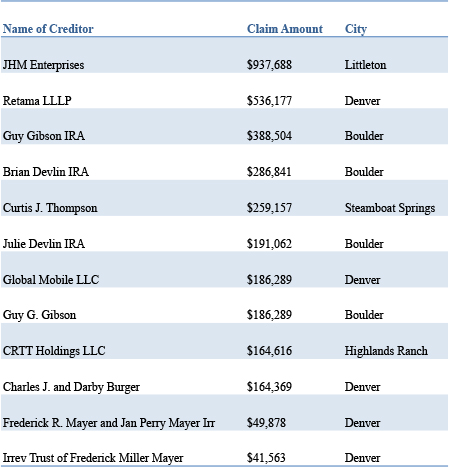 President John Sprengle said the filing “was done to facilitate the sale.”