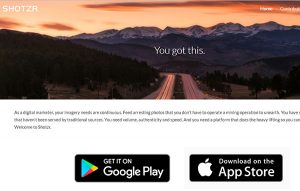 Littleton-based Shotzr, which provides companies with photography for social media, recently raised $850,000, according to an SEC filing Oct. 20. The amount was raised through 10 different investors.

The company’s app allows subscribers to search for photos for their social media feeds. Images are searchable by different attributes, such as location and season.

App subscribers also can request different types of images from photographers, such as a photo of a specific location. Shotzr pays photographers a percentage of royalties.

The firm scales subscription prices based on the amount of social media accounts. A basic package connects up to three accounts and 10 photos monthly from Shotzr’s catalog for $25 per month. The largest package starts at $500 per month, allowing 50 accounts and 10 images per account monthly. The subscription packages also allow different licensing for social accounts, email and image downloading.

Shotzr has 50 contributing photographers in the Denver/Boulder area, co-founder and co-CEO Mark Lemmons said. It is working to add photographers in other cities and plans to launch the full app early next year.

Before starting Shotzr in 2016, co-founder and co-CEO Frank Cardello was a principal with Transom Advisors in Denver and president at Deluxe Media Inc. in California. Lemmons was previously CTO at Deluxe Media and attended the University of Denver, according to their LinkedIn profiles.