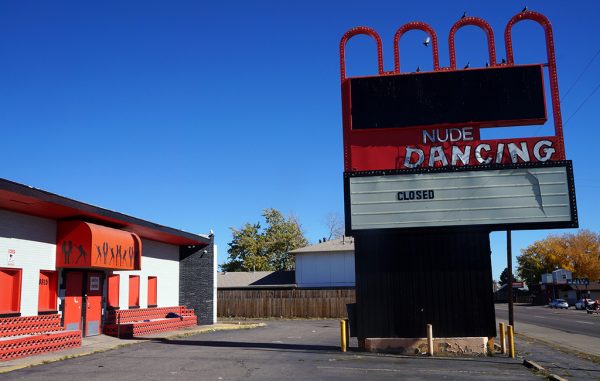 That’s a lot of dollar bills.

The City of Denver closed on its planned purchase of a defunct strip club last week, spending $1.3 million to acquire 8315 E. Colfax Ave., which most recently housed PT’s All Nude II.

The seller was Valentia Building LLC, which bought the property in 1994, according to city records.

The deal, which included an adjacent parking lot at 1500 Valentia St., kicks off a city effort to define a vision for the site, and ultimately find a developer to make it happen.

The 7,600-square-foot building, which features female silhouettes on a red canopy above the front door, will be demolished.

Prior to PT’s, which closed in 2016, the club onsite was known as Saturday’s.

The purchase was approved by City Council last month, and used funding from the U.S. Department of Housing and Urban Development.

Julie Stern, the city’s housing development officer, said the Housing Advisory Committee and Community Planning and Development Department will help determine the vision for the site.

She said that vision likely will feature an affordable housing component, but could also include retail or office space.

Stern said the planning department already is revisiting the area’s neighborhood plan, which could factor into future plans for the property.

Once the vision is determined, the city will accept requests for proposals on the project, Stern said. A timeline has not been established.

Stern said the city also spent $600,000 in April to purchase a site about a quarter-mile away at 7900 E. Colfax Ave. The Denver Post characterized that property as a parking lot where a lesbian dive bar once stood.

The city wants to redevelop that site as well, and Stern said it’s possible one RFP could be issued for both projects.

Denver Councilman Chris Herndon, who represents the area, said earlier this year he encouraged city leaders to purchase the strip club after recurring problems rankled community leaders, according to the Post. Those problems included a 2015 murder in the club’s parking lot.