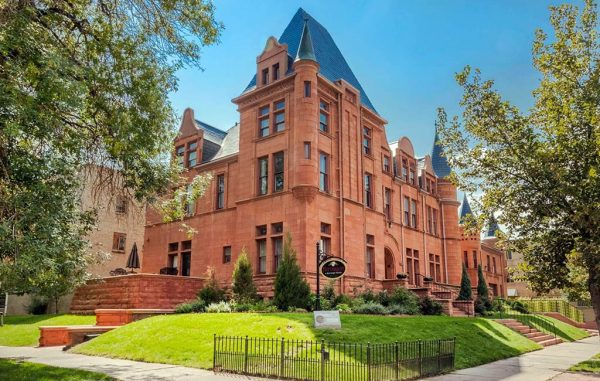 The Croke-Patterson-Campbell mansion in Cap Hill was listed for $2.9 million. (REcolorado and LIV Sotheby’s)

The Croke-Patterson-Campbell – with an exterior of Colorado red sandstone – has stood at the corner of 11th Avenue and Pennsylvania Street for more than 125 years. It’s now a B&B, but it was home to several of the state’s early politicians.

It is currently used as The Patterson Inn. According to the inn’s manager, the nine-bedroom, 13-bath bed and breakfast will stay open during the sale.

The residence was commissioned by Thomas B. Croke in 1890. Croke, originally from Wisconsin, was a merchant and plant breeder who served in the Colorado Senate.

Modeled after chateaus of the Loire Valley in France, the 13,000-square-foot mansion was designed by Isaac Hodgson Jr. It sits on a quarter-acre lot and features peaked roofs, turrets and a carriage house.

Croke sold the property in 1892 to Thomas Patterson, a fellow politician. Patterson represented Colorado in the United States Senate from 1901 to 1907 and was the publisher of Rocky Mountain News.

The house passed next to Patterson’s daughter Margaret and her husband Richard Campbell.

After turns functioning as apartments and office space, the building was vacant when current owner Brian Higgins acquired it in 2011 for $565,000, according to property records. Higgins, an architect, restored the building – keeping the original stained glass and hand-carved wood staircase – and reopened the space as an inn five years ago.

The property was listed in September by Alicia Cavallaro of Liv Sotheby’s.

The Croke-Patterson-Campbell mansion in Cap Hill was listed for $2.9 million. (REcolorado and LIV Sotheby’s)

The B&B's Colorado red sandstone has stood at the corner of 11th Avenue and Pennsylvania Street for more than 125 years, and was home to several of the state’s early politicians.