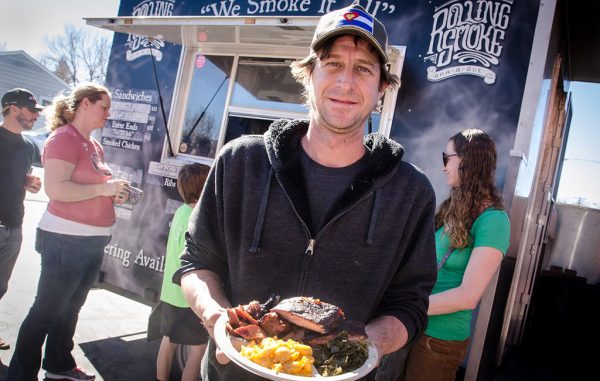 Rolling Smoke BBQ is barreling into its second location in six months.

The company was just getting warmed up with a July opening at the Stanley Marketplace in Aurora. In November, it will launch at 7470 S. University Blvd. across from Arapahoe High School in Centennial.

Walsh, 39, grew up in Oklahoma and developed a love for barbecue.

“I always had a dream of owning a barbecue restaurant,” he said.

He previously worked at Lehman Brothers as an account executive, then moved to Denver in 2002 and started cooking barbecue for friends in his backyard.

Walsh started Rolling Smoke as a food truck in 2013 with a restaurant as the end goal. He brought on Wade Williams and Andy Campbell as business partners to operate the Stanley and Centennial stores, respectively.

The next goal is to have eight restaurants in six years, he said, opening on average one per year.

The new 2,200-square-foot store will have a patio that seats 85 and two outdoor smokers with the capacity to smoke 500 pounds of meat each. The space was designed by Patrick McMichael of McMichael Design. Walsh said it will cost $100,000 to open the store.

Rolling Smoke will continue the trend of barbecue restaurants in the storefront, which previously housed Wild Bone BBQ and Burt’s Smokehouse.

The most popular items are ribs, brisket and burnt ends, Walsh said. A one-meat plate with two sides costs $14. The meat is smoked using pecan wood, giving it a nutty flavor.

Last year the company generated $90,000 in revenue from the food truck, and in August it brought in $90,000 from the Stanley store. Walsh is keeping the food truck for catering – a segment he plans to grow and operate out of the new store.

Rolling Smoke BBQ will launch a restaurant in Centennial just after getting warmed up with a July opening at the Stanley Marketplace in Aurora.