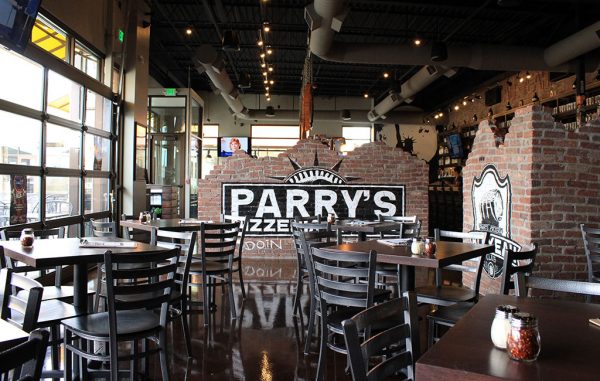 The chain has seven Colorado restaurants, and plans to add another in Centennial. (Parry’s Pizza)

A local pizza brand will be taking over the vacant Mellow Mushroom spot in Centennial.

Parry’s Pizzeria & Bar is opening its eighth Colorado location in the former Mellow Mushroom restaurant at 2154 E. Commons Ave. Later this fall, another Centennial State location in Loveland will open.

The company plans to expand by three stores per year for three years, marketing director Keniey Sonley said, adding that the end goal is 36 outposts. Parry’s is looking at Tennessee and Florida for future locations, Sonley said.

The Centennial location is expected to open in April 2018. Sonley expects to save on initial costs because it has existing infrastructure, including an HVAC system, left over from Mellow Mushroom.

Parry’s was founded in 2007 by brothers David and Jason Parry.

Sonley estimates the store will seat 350 people indoors and on the patio. The interior design will have Colorado beetle kill pine wood from trees infected with mountain pine beetles. A contractor has not been chosen.

The chain has seven Colorado restaurants, and plans to add another in Centennial. (Parry’s Pizza)