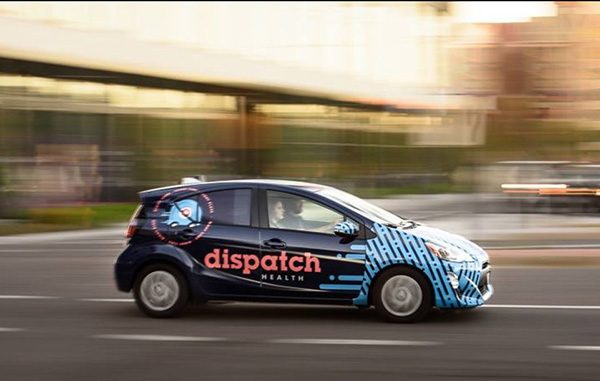 DispatchHealth is rushing to the top of the growth chart.

“We spent the last four years developing the model and the platform,” CEO Mark Prather said. “This capital is to spin out about 10 new markets in the next 18 months.”

Nurses and EMTs zip around the firm’s markets – Denver, Colorado Springs and Phoenix – in Toyota Priuses and Nissan Rogues filled with testing equipment and medical supplies. An ER doctor facilitates calls and sends a DispatchHealth employee to the patient’s home, ideally saving a costly ER visit.

Prather said the company, which is profitable and previously raised $7 million, has seven cars in Denver and two each in Colorado Springs and Phoenix. The startup will launch in Las Vegas on Nov. 7 and Richmond, Virginia on Nov. 17. Although Prather does not have the other 10 markets completely selected, he said a Florida market is in the works for February.

DispatchHealth leases both its vehicles and medical equipment, which costs about $3,000 per car. Once inside a customer’s home, Prather said, a staff member most often examines a patient in their living room.

“Our service really does well at helping people who struggle with access to medical care,” Prather said, referencing the elderly.

“It also works for the millennial who likes to use it as an app.”

Part of the funds will go toward hiring executives and technology and analytics employees. DispatchHealth employs 70 people, 60 of whom work at its 3,000-square-foot headquarters at Taxi in RiNo. Prather said the startup will add a third space by yearend at Taxi. The employees are split evenly between clinical workers and technology and operations staff.

“We are actively hiring for positions right now and we don’t have the space,” he said. “If I could pull it off, I’d love to stay (in Taxi). If we can’t find what we need here, then we’ll be out touring.”

Questa Capital, based in Washington, D.C. and San Francisco, co-led the round, along with San Francisco- and Denver-based Alta Partners.

Prather estimates 10,000 people have used DispatchHealth services in the Denver metro area in 2017.

The RiNo mobile checkup startup plans to use its most recent capital raise to expand into more markets.