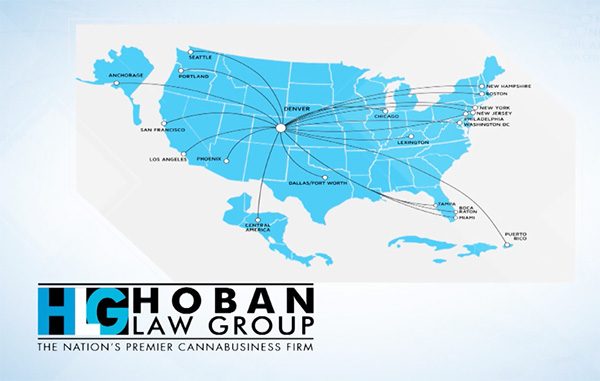 “Companies can now justify national advertising because there’s more states than not that can buy (marijuana) products,” he said.

The 30-second spot aired during prime viewing hours – between 7 and 10 p.m. – but catching the attention of the networks was not easy. Each network had different rules about using the word “cannabis” or showing marijuana plants, and navigating the rules took more than a year.

The ad first aired on the day of the eclipse in August, which Perkins said caused the number of views to dip. But since then, Perkins said, it has brought in more than 150,000 impressions on HLG’s website.

The ad is set up like many law firm commercials, with Bob Hogan in a library talking about cannabis law. The commercial caters to people looking to invest in or start cannabis businesses. It includes graphics and text on the industry – another way Perkins toed the fine line of network regulations.

Perkins started with radio ads for cannabis businesses on XM and Sirius stations while working with Hoban on a TV ad. Since the HLG ad aired, Perkins said he has started working with other businesses, such as Colorado companies Boulder Botanicals and Pure Kind Botanicals, on more radio and TV spots. He hopes to complete 12 ads by yearend.

“Because of Bob’s (ad) the phone has kind of been blowing up,” he said.

Hoban said the firm first launched with commercial law in 2007 as Hoban & Feola. In 2009 it represented dispensary chain CannaMart (now Silver Stem Fine Cannabis) as it sued the city of Centennial for closing it on the basis of selling a federally illegal product. The firm’s victory helped lead to current legislature on the state level and the eventual creation of the Marijuana Enforcement Division in Colorado.

“It was the first time in U.S. history that a court said a city could not shut down a business based on federal illegality,” Hoban said.

Hoban said the firm’s clientele is 60 percent marijuana businesses and 40 percent industrial hemp. Earlier this year, it filed a petition against the DEA on behalf of three companies working in industrial hemp. The case in ongoing.

For Hoban, the ad was more about professionalizing the marijuana industry’s image than gaining clients.

“This is not drug dealing any more. This is a sophisticated industry,” he said. “This has become a global cannabis industry, and we’re lucky enough to be at ground zero.”

Bob Hogan is now starring in national TV ads for his locally based law firm, trying to reach a growing pool of potential cannabis entrepreneurs.