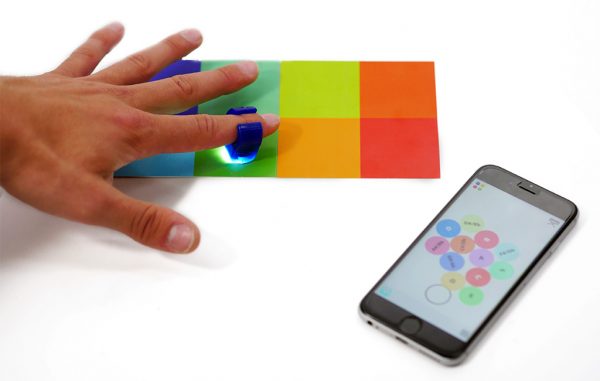 The wearable device sends data to a mobile app that plays a corresponding sound. (Specdrums)

The 24-year-old Cornell University engineering grad needed the money to make a batch of Specdrums, a set of app-connected rings that play a different sound each time the wearer drums their finger on a colored surface. So he launched a Kickstarter.

“We were worried about getting 15 (thousand),” Dourmashkin said.

But when the Specdrums crowdfunding campaign ended last week, the result was music to his ears: the product had raised $189,000 from 2,000 people, roughly 12 times his goal.

Dourmashkin said the Kickstarter was a way to show market validation to potential investors, who the company will start courting in order to hire more staff.

“It’s always been a side project,” said Dourmashkin, who is studying for a doctorate in aerospace engineering at the University of Colorado Boulder. “Now that it’s showing potential, it’s something I want to work on, now that I have momentum.” 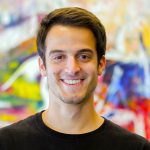 Dourmashkin, a Long Island native, came up with the idea for Specdrums soon after arriving at Cornell. He hadn’t been able to bring his drum set to campus, so Dourmashkin and fellow mechanical engineering student Matt Skeels invented Specdrums.

The final product wraps around a finger. In place of where a jewel would be set in a typical ring, the rings have a flat, squared face.

To play the device as you would a keyboard, users wear the rings on their ring fingers, above the first knuckle, with the square face on the palm side of their hand. The sensors also fit around drumsticks.

“You can just tap on anything,” Dourmashkin said.

Each inch-long device has a camera that captures one pixel of color. When the wearer drums his finger on a color, the device sends the data to Specdrum’s mobile app, which then reads the RGB color value and plays a corresponding sound.

Users can program the device so that different colors produce different sounds. Dourmashkin said users can reliably program up to 15 colors at once.

The Kickstarter campaign sold about 4,000 rings, Dourmashkin estimates. Specdrums is working on making the next version smaller and cheaper to manufacture in time for an online launch in early 2018. The new design will cost $70 to $80 for a pair of rings.

Dourmashkin plans to scale back his doctoral studies to focus on the startup.

“I really enjoy it. I have control over what the product is,” he said. “I wouldn’t get that at any other job.”

The wearable device sends data to a mobile app that plays a corresponding sound. (Specdrums)