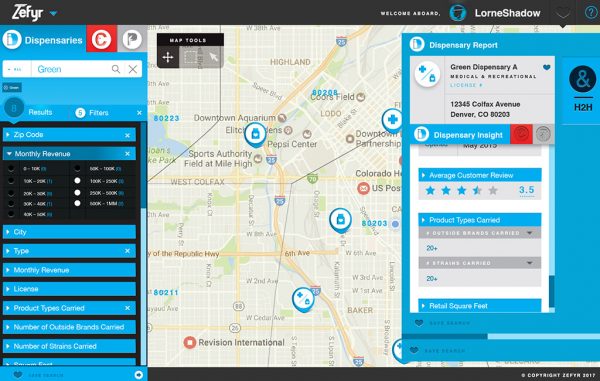 Dispensaries can use the data to push products based on the habits of nearby customers. (Zefyr)

Three Denver advertising execs have left their agency to start a data analytics software company for the marijuana industry.

Zefyr’s software matches product data like sales and price to consumer data. Users can filter the data by location and demographic information about customers’ age, sex and (in the case of medical marijuana) medical history.

“We wanted to give (users) information that let them make real business decisions without having to ask somebody to do this huge analysis work,” Skul said. “If you’ve ever used Google Maps, you can use Zefyr.”

Skul, the company’s board chairman, said dispensaries can then use the data – assembled by getting information from dispensaries, accessing public data and using secret shoppers – to push products based on the habits of nearby customers.

And because consumer information is constantly in flux, Zefyr will update daily. Skul said fellow cannabis data purveyors like Headset compile data into static studies and reports for customers. 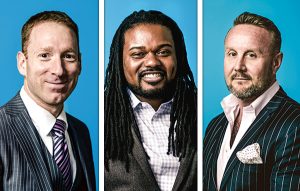 Zefyr is also a compliance tool, drawing data about local regulations. It covers each of the 29 states where medical marijuana is legal and the seven states that have legalized recreational marijuana.

The Denver-based company will debut in Colorado and expand nationwide a few weeks later. Skul said Zefyr has 60 cannabis companies queued up for the October launch, about 20 percent from Colorado.

After rebranding a line of CBD products for Strategic Pharma Inc. while working with Zeitsight, the group saw an opportunity in the cannabis sphere. At Zeitsight, they focused marketing campaigns on specific data, so they closed shop and formed Zefyr Inc. in April.

The company says it pooled $2.9 million of personal savings to build Zefyr. Fretta said the firm is also in an open funding round for an additional $2 million.

It leases office space at 720 S. Colorado Blvd., but many of its six full-time programmers and two managers work remotely. Skul said Zefyr will look into hiring more local employees for sales and administration after the October launch. After that, the company will be in the market for new office space.

Dispensaries can use the data to push products based on the habits of nearby customers. (Zefyr)

Dispensaries can use the software's data - assembled from dispensaries, public data and secret shoppers - to push products based on the habits of nearby customers.