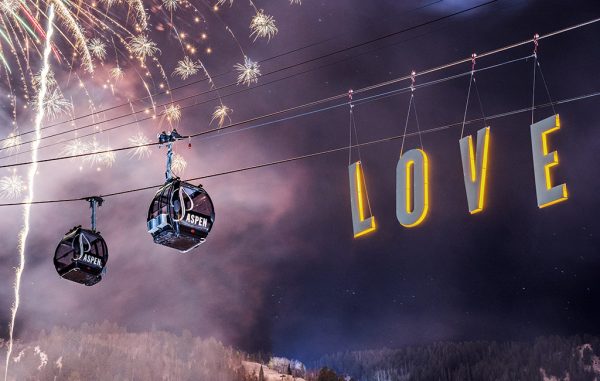 The ‘love’ ad focuses on Aspen Gay Ski Week, which started at the resort in the ‘70s. (Aspen Skiing)

Breathtaking mountain views, an airborne skier trailing powder, and white snow against blue skis. Such are the clichés of ski resort advertising campaigns.

But that’s not the focus for Aspen Skiing Co. The company’s 2017 advertising campaign by Denver ad firm Karsh Hagan is meant to market the resort’s values more than its vistas, highlighting the history of Aspen Gay Ski Week and Aspen’s efforts to protect the environment, among other social causes.

Aspen started working with Karsh Hagan on this year’s advertisements last May. But it wasn’t until Aspen Skiing CEO Mike Kaplan wrote a column reacting to the election of Donald Trump that the ideas for the final campaign came into focus.

Aspen “has always been and will always remain dedicated to tolerance, open-mindedness, environmental sustainability, and civility,” Kaplan wrote.

Kaplan also pledged to “fight for a stable climate,” to “stand beside our LGBTQ friends” and to be a sanctuary Latino and Jewish communities threatened by Trump’s rhetoric and platform.

Each word evokes what the company is calling “the Aspen way,” Knapp said. The ‘love’ ad focuses on Aspen Gay Ski Week, which started at the resort in the ‘70s. Other ads point to the social justice and environmental work. 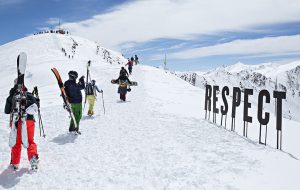 The print campaign will be featured in national outdoor industry magazines. (Aspen Skiing)

The print campaign will be featured in national outdoor industry magazines like SKI, Outdoor and Snow. The associated videos will be on the Aspen Snowmass website.

The print ads will each feature one of the words in a prominent spot on one of Aspen’s four mountains. Love is seen hanging from the gondola wires as fireworks light up the night sky. Unity sits on top of a ski and snow board rack. One of the videos has voiceover narration talking about openly living the values of the campaign over scenes of skiers, snowboarders and the Rocky Mountain scenery.

Each of the words in the photos and videos were constructed by The Public Works, a Denver-based multimedia company.

The shoots for the campaign were done earlier this year, so that Karsh Hagan could take advantage of the snow for photos. After shooting the photos and videos, some of the words were left out for the public to see. Knapp said it helped to organically spread the campaign on social media before it officially started.

“We knew what we were doing and we knew there was a purpose, but we didn’t want to reveal it just yet,” he said.

The ‘love’ ad focuses on Aspen Gay Ski Week, which started at the resort in the ‘70s. (Aspen Skiing)

Aspen Skiing Co.’s 2017 advertising campaign by local agency Karsh Hagan is meant to highlight the history of Aspen Gay Ski Week and the resort's efforts to protect the environment, among other social causes.