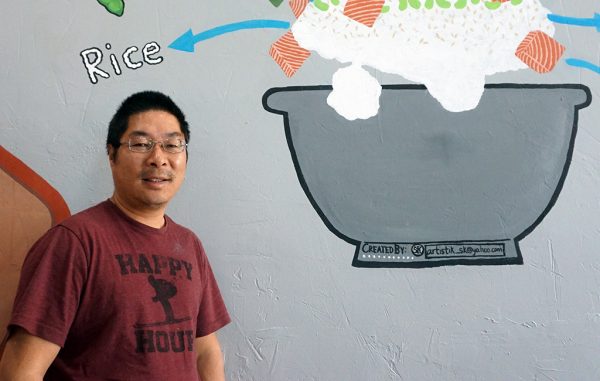 Poke is pitching a place at one end of the 16th Street Mall.

PokeWorld opened recently at the corner of Broadway and 16th Street. The restaurant is the second poke restaurant for Ben Ke, a 20-year veteran of the restaurant industry. Ke operated sushi restaurants around town before switching to poke this year.

“If people like sushi, they will eat raw fish and they will try poke,” he said.

The 1,300-square-foot space will seat 30 people. The restaurant leases the space for $40 per square foot, according to the listing broker, Bryan Slaughter of Sullivan Hayes. Ke said it cost him $140,000 to open the shop.

Ke, 50, is originally from China and came to Denver in 2001 by way of New York City. He said poke is easier to pull off than sushi, which requires more varieties of fish and more experienced chefs.

And because it’s faster to prepare, Ke plans to open for lunch business from nearby office workers instead of catering to the dinner crowd as he would with his sushi restaurants, which he sold last year.

“A sushi restaurant doesn’t have lunch because it takes time,” Ke said. “But for poke it’s easy.”

Ke is betting there’s an appetite for more 16th Street poke if he can find the right space. And if not, two other Denver restaurants keep him busy: He owns Corner Ramen and RockFin Poke near Colfax, which opened earlier this summer.

“For me it’s too early to retire,” Ke said. “I still have to do something.”

20-year restaurant veteran Ben Ke sold his sushi spots last year in order to launch PokeWorld, which opened over the weekend at the corner of Broadway and 16th Street.