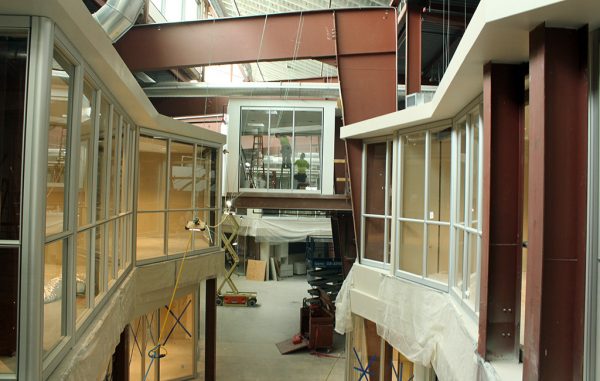 The 152,000-square-foot space in RiNo is nearing completion. (Kailyn Lamb)

A national coding school is pulling out of one coworking space in LoHi and booting up in RiNo.

The coding company will have space for four classrooms. A full-time web development course at General Assembly costs around $14,000.

The chain competes in an increasingly crowded market. The University of Denver and DeVry University have begun offering coding bootcamps. Galvanize coworking also offers coding classes out of its Golden Triangle locations. Other businesses focus solely on coding classes such as Skill Distillery, Turing School of Software and Design and DaVinci Coders.

Brady Welsh, director of leasing and development at Industry, said General Assembly rented space from Industry in early 2016 while WeWork was under construction.

He said Industry’s 152,000-square-foot building should be finished by November.

The first three tenants for the coworking space – Velocity Global, Cloud Elements and Cloud Nagel – are moving in from the original Industry building on Brighton Boulevard into larger offices. The three companies occupy 30,000 square feet in the new building.

“Now that we’re getting some of the bigger spaces secured we’re really starting to focus on the 1,000- to 6,000-square-foot spaces,” he said.

The 152,000-square-foot space in RiNo is nearing completion. (Kailyn Lamb)

A national programming academy is pulling out of one coworking space in LoHi and booting up in RiNo.