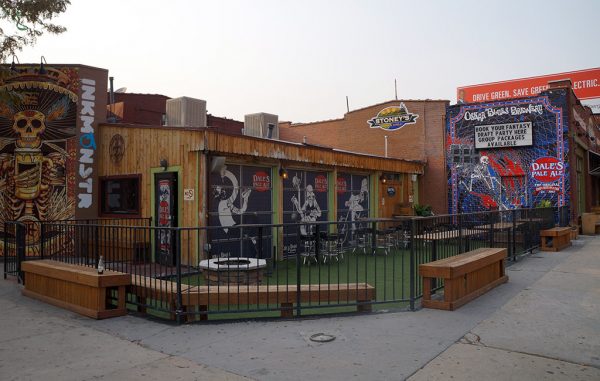 Stoney’s Bar and Grill at the edge of Cap Hill. (Amy DiPierro)

Stoney Jesseph, bar owner at Stoney’s Bar and Grill at the edge of Cap Hill, has coveted an Uptown corner for more than 20 years.

The spot on 17th Avenue and Downing Street is finally his.

The bar is a project by Will Trautman and Stoney Jesseph, the namesake of both bars. Jesseph sees Uptown as a neighborhood thirsting for a sports bar after Tavern Uptown temporarily closed last year to make way for a 315-unit apartment complex.

“(Uptown has) more upscale eating, but they don’t have what we do, which is fun bar food in a sports bar,” he said.

Jesseph said he has been eyeing the 17th Avenue bar since it was Las Margaritas, which presided over the corner for 25 years before it turned over to Argyll in 2013.

Jesseph has made a career of running big Denver bars. Before he opened Stoney’s, which can host a crowd of 600, he served 350 patrons at a time in Governor’s Park.

Those kinds of numbers dwarf the Uptown space, which seats 200 people. Jesseph said working with a smaller clientele will allow the owners to experiment with the menu.

Like at the original Stoney’s, Jesseph said, he’ll coordinate drink promotions with vendors and alumni associations as one way to keep the bar at 1035 E. 17th Ave. topped up.

From there, Stoney’s plans a few changes to polish off the space. Jesseph said the bar will have “a slight throwback feel to it,” more than 20 beers on tap and televisions for sports viewing.

The aim is to open before the end of football season, he said, in late November or early December.

Stoney’s Bar and Grill at the edge of Cap Hill. (Amy DiPierro)

A spinoff of Stoney’s Bar & Grill, at the edge of Cap Hill, plans to open in the space last home to Argyll Whisky Beer by late fall.