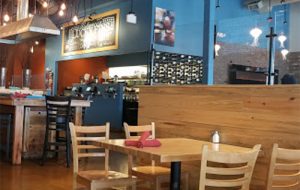 Olde Town Arvada is getting a splash of seafood.

Ken Boyle is a co-founder and partner in the seafood chain, which got started in Meridian, Idaho, in 2011. Boyle said the restaurant concept had been eyeing Arvada for its seventh location because of similarities to Fort Collins, Littleton and Greeley, where the restaurants are individually profitable.

The storefront is virtually “on Main and Main,” Boyle said. “It’s right there backed up against the rail system. It’s right across the street from a 400-spot parking lot, plus we’ll have valet. You can see the density of people in that area. It’s kind of a no-brainer.”

The restaurant plans to open before December.

Boyle spent 12 years as an area director at chain restaurant Chili’s before starting the Lucky Fins and Smokin Fins restaurant with three partners a decade later. The seafood concept kicked off in Idaho before moving into Colorado and Arizona.

Boyle said he and his co-founders took on investors to launch, but now are able to self-fund Arvada and future restaurants with profits from existing locations. The restaurant group intends to remain privately held.

“Our flavors have got a little attitude,” Boyle said. “My wife would say, ‘Why do you have salt and pepper shakers on the table? You don’t need them.’”

The menus are an eclectic mix, sushi under one header and tacos on the next. Boyle said the biggest challenge has been stoking a smoked seafood and meats program.

“It’s been a big learning curve,”he said. “It’s an art, keeping the wood the perfect temperature, making sure you’re using the right hard wood. It’s not something you can drop in the fryer, set the timer and pull it out.”

The Arvada location will seat 175 people in a 5,000-square-foot space. Boyle said general contractor Williams Construction is demolishing some walls and widening windows to open up the space. John Sponseller with Ethos Architecture Group designed the space.