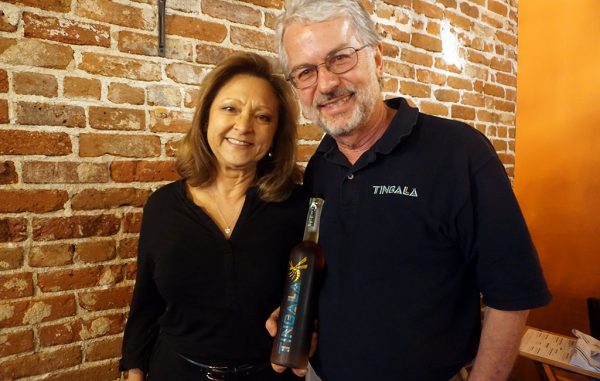 Susan and Bob Tews created Tingala, a liquor with the numbing properties of the Spilanthes flower. (Lynn Yen)

For the last year, a former TV cameraman – along with his wife and adult son – has been hustling to Front Range bars and liquor stores selling a new type of booze that leaves the lips and mouth with a tingly sensation.

Bob Tews first tried the mouth-numbing Spilanthes flower in 2008 and thought it would work well in a drink. He was already an experienced home brewer with regrets about not opening his own brewery.

“If we don’t do this one, someone else will,” he said of his latest venture.

The Tews’ made the first liquor containing Spilanthes in the U.S., have sold 1,300 bottles since March 2016 and are in 70 bars and liquor stores.

The family-owned operation involves Bob as manufacturer, wife Susan as president and son Eric as distributer.

The idea was born when Tews tried absinthe on a trip to Europe with his son. He started growing the ingredients in the family’s Greenwood Village backyard, and when the drink became legal in the U.S., he wanted to open a distillery. 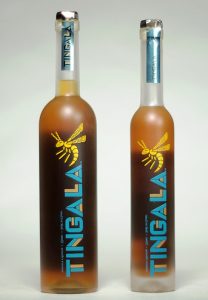 The 100-proof liquor is made from Spilanthes and cinnamon. (Tingala)

But by the time Tews learned about distilling, he found the demand for absinthe wasn’t there.

Then Tews came across Spilanthes, which he started growing in his backyard as well.

Spilanthes, also called buzz buttons, is a flower native to Brazil where it is used as a spice. The flower produces a prickly numbing in the mouth. The tingling sensation is most comparable to Sichuan peppercorn, Susan Tews said.

After working on the recipe for five years, Tingala was born by combining Spilanthes with cinnamon in a corn-based spirit.

Tews makes and bottles the 100-proof drink at Mile High Spirits, where he is employed. He learned the distilling process by interning at Downslope Distilling.

“Making it is easy; selling is hard,” he said. “We knew that was the hardest part, but we still underestimated it.”

Tews is a former photographer and cameraman for 9News and ABC News. He ventured into sales for the first time pitching to bar managers and liquor buyers.

Tingala currently is distributed in Denver and Boulder, and the Tews’ hope to expand along the Front Range.

“The beauty of Tingala is it modifies a cocktail in a new and exciting way. And you can only get it in the Denver metro area,” he said.

Susan and Bob Tews created Tingala, a liquor with the numbing properties of the Spilanthes flower. (Lynn Yen)