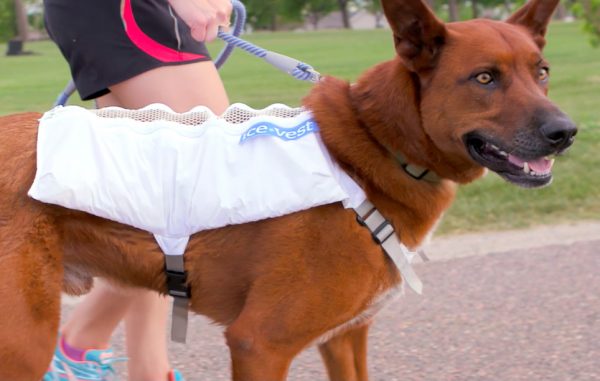 On any given morning, you can find David Hill running around City Park, Wash Park or Cheesman with two or three dogs in tow.

Hill, 47, is an ultramarathoner and a full-time dog runner. He hardly breaks a sweat, but in the dog days of summer, his canine customers are panting to keep up.

“They are wearing fur coats,” Hill said. “They need something to keep their core temperature down.”

So Hill and Linda Holland invented the Canine Ice Vest, a mesh vest with pockets to hold ice. This year, they produced 500 vests, more than six times as many as their first year. Their next target is getting the vests onto more local store shelves.

Hill has worked for a decade as a dog walker. He started the dog running service Canine Pacer in 2012 after moving to Denver. 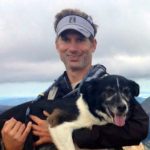 “The toughest challenge was during the summer, running from water fountain to water fountain,” he said. “When it’s 90-plus degrees out, dogs do die.”

The problem isn’t just fur. Dogs don’t have as many sweat glands as humans, which puts them at risk of overheating.

Hill tried dog-cooling products on the market, but found they were too heavy. In 2013, he came up with his own design, inspired by the ultramarathon vests he buys for himself. By 2014, he was sewing prototypes.

Hill said Canine Ice Vest cools dogs as ice melts down the dog’s coat and heat evaporates through the mesh fabric. The vests, made from ripstop nylon and manufactured in Thailand, come in three sizes. A patent is pending on the design.

Hill and Holland so far have put $12,000 of personal savings into the venture.

The vests debuted at the Cherry Creek Arts Festival last year. Hill sold 40 – half his inventory that year – in one day.

Customers can buy the Canine Ice Vest at Two Pals and a Pup in Cherry Creek and PC’s Pantry in Boulder. They retail for $45 on the company’s website.

Hill has always used the dog-running business to stay in shape for races, but the business now has Hill training for a new competition: a local pitch night for startups coming up in October.

Ultramarathoner David Hill is out to find more store shelves carrying his ice vests tailored for the dog days of summer.