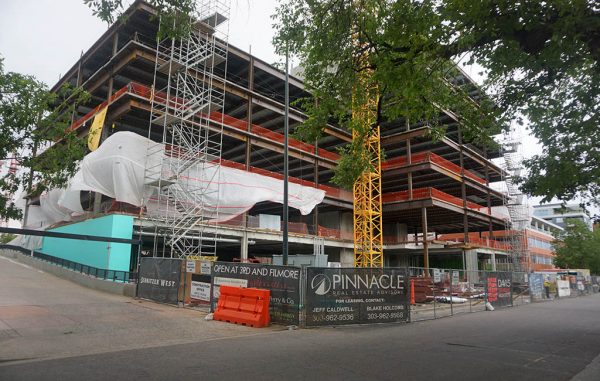 The 801 Restaurant Group already served up “turf” at its Chophouse restaurant inside the Cherry Creek mall. Now the company is adding “surf” to the upscale neighborhood.

801 Fish will be housed on the ground floor of the Civica building at 250 Fillmore St. in Cherry Creek North. The seven-story office and retail building is being developed by Seattle-based Schnitzer West with JP Morgan Asset Management as investors.

The restaurant is set to open in late spring 2018.

801 Fish is the sister restaurant of 801 Chophouse in the Cherry Creek Mall. Both are owned by 801 Restaurant Group.

In early July, the Denver-based company signed a lease on a 7,000-square-foot space fronting Fillmore Street.

Co- owner Jamie Lynch said the demographics of the Cherry Creek neighborhood and quality of the Civica influenced the location choice.

“It is a first-class building,” he said. “There is an enormous amount of capital investment in Cherry Creek.”

The restaurant will seat 200 people inside with an additional 125 capacity on a patio that will be the “largest patio in Cherry Creek,” according to Lynch.

Lynch said the company will handle the interior design. He estimates the cost of the restaurant will be a couple million dollars.

The spot also will offer free valet parking – a service introduced at 801 Chophouse in response to paid parking at Cherry Creek mall changes.

“It’s not cheap,” Lynch said of valet parking. It is a “major investment, a major feature.”

The 801 Restaurant Group was started 25 years ago by Jaime’s father Jimmy Lynch, a US Naval Academy graduate and former stock broker. Its first location was opened in Des Moines at 801 Grand Ave., the namesake for the company.

The 801 Restaurant Group already served up "turf" at its Chophouse restaurant inside the Cherry Creek mall. Now it's adding "surf" to the upscale neighborhood.