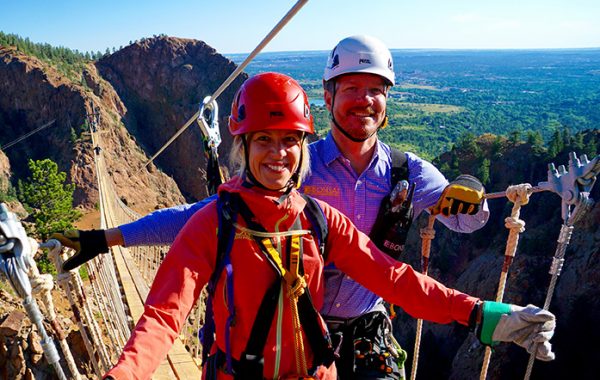 During their tenure of running the ropes of a Grand Junction-based zipline and challenge course manufacturer, a husband-and-wife duo has completed high-altitude projects in 20 states.

Now, Bonsai Design is launching its newest installment: a $2.6 million development at the Las Colonias Park in Grand Junction that will anchor an assortment of eight to 10 other outdoor manufacturers and companies. As an extra draw to tourists and locals, the Shraders also plan to build a zipline across the Colorado River near the development.

On July 19, the Grand Junction City Council approved the incentive package for Bonsai Design to receive $1 million from the city and pay $20,000 per year for a 25-year land lease.

“The nickname for the last 50 years has been ‘Junktown,’” co-founder Thaddeus Shrader said. “What we’re trying to do is bring people down to the river.”

The story of Bonsai started accidentally in 2005. The Shraders had moved to Grand Junction for Thaddeus to be stationed there at his first base as an airline captain. Sarah’s brother was in town doing maintenance and inspections on ropes courses. He handed Sarah two boxes of receipts, saying he needed help starting a ropes course company because someone asked him to build a canopy tour in Alaska.

“I basically created the skeleton of the company,” Sarah said. “The aerial adventure industry is pretty young in North America … It’s just been a really fun and wild ride.”

After its beginnings in the Shraders’ basement, Bonsai now has 25 employees coming to work at Bonsai’s rented headquarters at 201 South Ave., a 9,000-square-foot facility split between its office and manufacturing space. Bonsai has completed projects for all of Vail Resorts’ locations, including Vail, Breckenridge, Heavenly and Park City, as well as developing new components such as breaking systems and trollies for their courses.

“That’s been really fun to create new components to better the participant experience and make it more efficient,” Sarah said. “Not only are we increasing safety, but we’re getting more people through faster.”

Earlier this year, the Shraders sold Bonsai’s headquarters in downtown Grand Junction–where it had been located since 2012–to a Phoenix-based developer.

“We started getting shopped around,” Thaddeus said. “We considered strongly moving out of Grand Junction.”

Eventually, the pull to stay in Grand Junction was too strong. The Shraders have access to trails five minutes away, plus access to all the metal workers and fabricators for their zipline and aerial tour components. Instead, the Shraders decided to approach the city about an outdoor recreation center along the Colorado River.

“We are trying to play a bigger role for our community,” Thaddeus said. “We are not just a city tied to oil and gas. Let’s diversify. Let’s make sure people know we have an insane access to the outdoors.”

With the latest approval from the City Council, Bonsai hopes to bring in up to 10 other outdoor businesses to join Bonsai at the 14-acre business park, although Sarah said no negotiations have been finalized. Bonsai plans to build a 10,000-square-foot facility, plus a 20,000-square-foot warehouse, while hiring an additional 15 employees.

“When the bike manufacturer and zipline man is done with work, they have a place to go and celebrate the end of their workday,” Sarah said. “People can take their standup paddleboard from the retail shop and try it.”

The Shraders are hoping the business park will help draw more tourists and the general public to the Las Colonias Park, an underutilized resource of the city. Right now, the 147-acre park has a 5,000-person amphitheater, but future improvements include a boat ramp, recreation area and light retail, in addition to the outdoor business park. The costs to redevelop the entire park are $10 million, Greg Caton, city manager for Grand Junction, said.

“Bonsai is an exceptional company that’s been here in Grand Junction for a good number of years,” Caton said. “They are the epitome of what we are trying to focus on with this outdoor recreation vision.”

A husband-and-wife duo plans to break ground on a site to anchor eight to 10 outdoor manufacturers and companies.