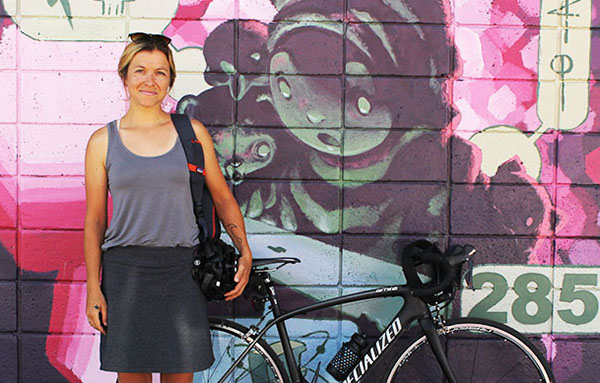 Christi Turner is what you’d call a scrappy entrepreneur.

Turner, 35, launched her business, Scraps Mile High, this month. For now, she’s a one-woman company, collecting food scraps from businesses and delivering them to composting bins using a bicycle rigged to pull two large bins on a cart.

Turner hopes this service will plug the holes in the City and County of Denver’s compost program. She says Denver’s composting service extends to buildings and single-family homes with fewer than seven units, but leaves out many of the city’s densest neighborhoods.

“My whole point is to fill in the gaps, and meet (trash companies) at their edge,” she said.

Turner is no stranger to environmentally minded ventures.

While working for the Peace Corps in Madagascar, she helped to start a nature preserve and built a solar-power radio station. She later reported on climate change and the environment as a journalist, first at an online newspaper in the Arctic Circle and later at High Country News in Paonia.

More recently, she’s worked as a freelance reporter and a communications manager for Alliance for Sustainable Colorado, a nonprofit that champions environmental sustainability.

Then she decided to start Scraps.

The largest expenses have been buying bins for clients and leasing-to-own a special bike with three wheels and a cart to transport the compost.

This spring, Turner was ready to take her new chariot for a spin. She started out by working at The Big Wonderful in May, composting 425 pounds of scraps.

“That’s been a really great way to show impact really quickly,” she said.

Her first business client was Work & Class, a RiNo restaurant. She has added three other businesses to her route, picking up a total of 4,050 pounds of compost in one month.

The company picks up three days a week and transports the compost to Alpine Waste and Recycling bins at the Alliance Center at 15th and Wynkoop streets. Alpine then hauls the scraps to a composting facility owned by A1 Organics in Keenesburg.

Restaurant and small business pricing varies, depending on the weight of the scraps. For individuals, she plans to charge a $20 startup fee plus $10 a month. Her next step will be to court apartment customers.

Turner knows that other local compost businesses, such as Boulder-based Eco-Cycle, use trucks to transport food scraps. But owning a fleet of trucks is not for her.

“Scraps really is as much about advocating for bike-based business decisions, whatever that could look like, as it is about keeping waste out of the landfill,” she said. “I want the city crawling with Scraps bikes.”

Scraps Mile High plans to collect food remains from businesses and deliver them to composting bins. And all by bike.