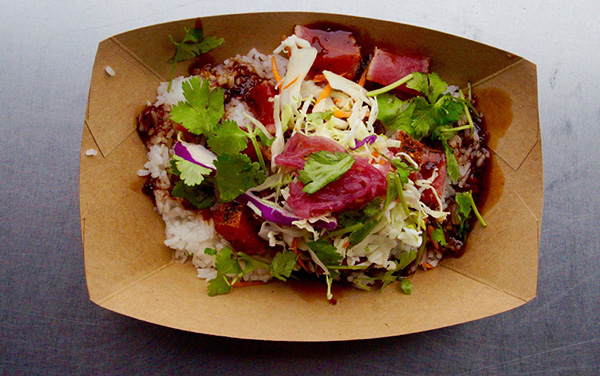 Korean-Mexican cuisine is coming to Englewood.

Chuey Fu’s, which started as a food truck in 2013, will open its second stationary location at 2950 S. Broadway this fall. It opened its first restaurant on Santa Fe Drive in 2016.

“It was a lot of trial and error,” he said. “We tried a bunch of different things.”

The outcome is a menu whose selections include pairing cucumber wasabi with chipotle barbecue sauce, and a pho burrito with ingredients such as rice noodles, bean sprouts, Thai basil and cilantro wrapped in a tortilla. Also, Knoblich will nix ramen and add Hawaiian barbeque dishes.

Knoblich signed a lease on the 2,500-square-foot Englewood space this week. John Livaditis with Axio Commercial helped broker the deal.

It rents for around $7,000 a month, Knoblich said. The store is waiting on a liquor license and aims to open around October.

Knoblich is using a small business loan from the Colorado Enterprise Fund and is reinvesting company profits to fund the third Chuey Fu’s. He estimates the restaurant will cost about $65,000 to open.

Knoblich said the Englewood storefront needs just some cosmetic changes, since it’s already outfitted with restaurant equipment from the previous tenant, Bufa Mexican Grill. He said the second store will look much like his first, with wooden tables repurposed from old bowling alley lanes.

“I have that food truck mentality – keeping things simple,” he said.

The restaurant will seat around 90 people and include front and back patios when complete. Frank Walley is the general contractor.

Knoblich is from Idaho and moved to Denver 11 years ago. He got started cooking Italian food with his grandmother, then opened restaurants for Richard Sandoval and Larkburger before starting his own business.

“(A food truck was) the quickest avenue to get a restaurant open,” Knoblich said.

“I hope we keep adding (new restaurants),” Knoblich said. “I want to grow. I’ve got to do something else to keep me busy.”

Chuey Fu’s, which started as a food truck in 2013, will open its second stationary location at 2950 S. Broadway this fall. It opened its first restaurant on Santa Fe Drive in 2016.