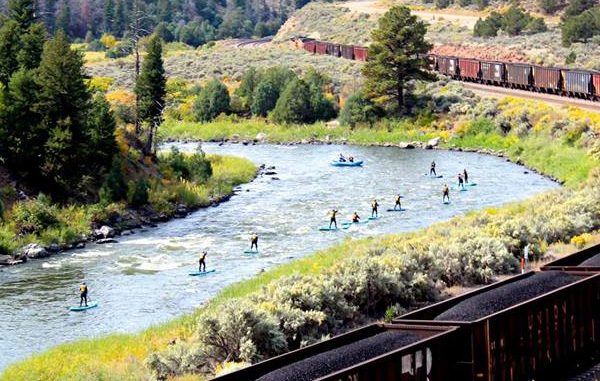 Following the acquisition, the company will offer multi-day paddle board trips at Dinosaur National Monument. (Stand Up Paddle Colorado)

Stand up paddle boarder Javier Placer left the ocean for the mountains. But he couldn’t leave the surf.

“Being a kayaker and ocean transplant from Florida,” Placer said, “as soon as I got on a paddle board I was like, ‘Holy crap. This could be something.’”

The 40-year-old co-founder of Stand Up Paddle Colorado is about to expand its whitewater tours to Dinosaur National Monument’s Green and Yampa Rivers, where it will lead its first five-day expedition in August.

SUPC has been leading trips on the Colorado River since 2009. But the company’s tours in Utah will stretch through more remote terrain in the Dinosaur National Monument, a 200,000-acre stretch in Utah and Colorado known for its Native American petroglyphs, dinosaur fossils and whitewater waves.

“There is nothing that is a full-on expedition,” Placer said. “I really think this area is what Moab was 30 to 40 years ago. It’s nowhere near as crowded as Moab is and it’s not as hot.”

In April, SUPC secured permits in the Dinosaur National Monument for commercial guiding trips, allowing it 18 multi-day trips per season and daily launches.

Expeditions for four or five days cost $1,200 to $1,300 per person. The tour group has 10 Hala Gear paddle boards for the trips. Each excursion includes one instructor for every four customers, plus a raft to haul gear and give fatigued guests a rest.

“We know there is definitely a market,” Placer said. “No longer are we just in boats where people are barking orders at you, but you’re the master of your own boat.”

Adrift will remain a whitewater rafting company and keep its name. As for the stand up paddle board trips through Dinosaur, Placer plans to pitch specific groups with tours tailored to yoga enthusiasts, family reunions and bachelor/bachelorette parties.

Placer started SUPC on the Colorado River near Rancho Del Rio in 2009 before expanding to Lake Dillon in 2013 and Nottingham Lake in Avon in 2015. Its total 2016 revenue from three locations was $400,000, Placer said.

SUPC used its own funds to purchase Adrift, which employs a dozen people, Placer said. In Colorado, SUPC has 20 employees.

Placer thinks SUPC has just skimmed the surface of what’s possible on the boards.

Besides renting paddle board equipment and guiding day trips on the Colorado River, SUPC is building stand up paddle board race teams in Lake Dillon and even plays paddle board water polo in Avon.

Following the acquisition, the company will offer multi-day paddle board trips at Dinosaur National Monument. (Stand Up Paddle Colorado)

Stand Up Paddle Colorado is expanding its tours to Dinosaur National Monument's Green and Yampa Rivers, where it will lead its first five-day expedition in August.