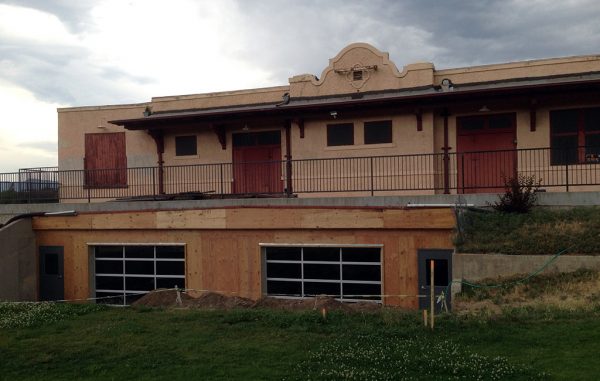 The building consists of an old train depot originally built in 1915, which was put atop its current foundation in 1994. (Letterpress Depot)

The Letterpress Depot would never trade in its centuries-old printing press technology for a newer model. But when it comes to the 1915 train depot housing those presses, the nonprofit print studio is ready for an update.

Letterpress has raised more than $40,000 as part of a three-year, $500,000 push to revamp the Englewood building that houses its 15 letterpress printers, an old-school form of printing in which the operator lines up letter blocks into a row, dips them in ink and presses them to a page.

Peter Bergman, president of the Letterpress board, said the 4-year-old nonprofit is starting its renovation from the outside in, making the lower level of the building more ADA compliant with an entry ramp.

“This is a multi-year project. What we were concentrating on in the first year was to get the funds for the outside of the building,” Bergman said.

The building consists of an old train depot originally built in 1915, which was put atop its current foundation in 1994. Internal fixes will include electrical and plumbing work and adding a wall to complete the foundation.

The entire project will take three years and between $350,000 and $500,000 to complete, Bergman said. The nonprofit raised $27,000 using an IndieGogo campaign and another $15,000 from donors that pitched in offline. For the rest, Bergman said, Letterpress will seek grants for building preservation and continue fundraising with members. 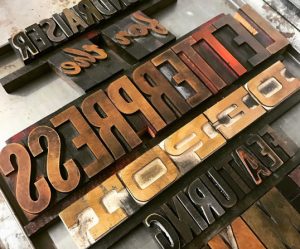 “We’ve realized that crowdfunding will only get you so far,” he said. “A project this large really relies on large donors, corporate donors and grants.”

Professional letterpress printer Tom Parson started Letterpress Depot in 2013 after buying the building from the city of Englewood. The nonprofit is supported by donations, memberships and revenue from printing classes. Letterpress started the building campaign with nearly 100 members, and has since added 40 to 50.

Letterpress uses blocks for each individual letter or image. For centuries, it was the only way to print and was used on everything from mundane forms and annual reports to works of art.

Letterpress printing has resurged in arts and crafts circles. Bergman noticed a bump in popularity after Martha Stewart used the technology to make wedding invitations, and it’s still used to emboss the dust jackets of blockbuster books like Harry Potter.

Visitors to the Letterpress studio can try out the technique for themselves, choosing from 2,000 fonts and types under the supervision of an employee. Bergman said it’s the only press of its kind open to the public in Colorado.

“This is probably one of the largest collections of historic printing press type in the country,” Bergman said. “People who do it love it. They don’t want to see it scrapped.”

The building consists of an old train depot originally built in 1915, which was put atop its current foundation in 1994. (Letterpress Depot)

Letterpress Depot has raised more than $40,000 as part of a three-year, $500,000 push to revamp the Englewood building that houses its 15 letterpress printers.