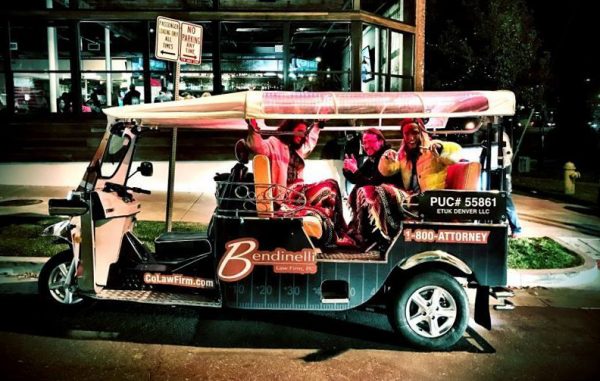 The tuk tuk – a three-wheeled, electric rig shuttling Denverites around RiNo and LoDo –  is puttering onto South Broadway.

ETuk, which manufactures the vehicles here and manages a fleet of the quiet people-movers, is starting a free shuttle route on Broadway from the Alameda light rail station to Third Avenue. Councilman Jolon Clark has been working to set up the circulator for over a year.

ETuk CEO Walid Mourtada said there will be five stops by the July 13 launch. The service is funded by neighborhood businesses and is free to ride.

The circulator is running on Thursday evenings, and the eTuks which seat six, will only stop at designated stations to load and unload passengers.

The company already operates a neighborhood circulator in RiNo.

“We always envisioned micro routes,” Mourtada said. “The partnership is what makes it successful. If we had tried to launch it on our own, it wouldn’t have worked.”

The Drink RiNo Circulator is a free service with five stops servicing 25th to 37th streets in RiNo every Saturday and the first Friday of every month. The next step is extending to the 38th and Blake light rail station.

The service started in January and is funded by Drink RiNo, a business association of 15 breweries, wineries, cideries and distilleries. About 200 people use it daily. In June, a third vehicle was allocated to the route from eTuk Denver’s fleet of six.

“They asked for a third vehicle,” Mourtada said. “Drink RiNo is voting with dollars to increase service.”

Lewis Davis, general manager, said he hopes the city will help by granting them special access such as designated parking at light rail stations.

“With the second one, showing it works, we could create some traction,” Davis said. “Ideally we would love to be in the bus lane.”

ETuk Denver is looking at expanding to other neighborhoods in Denver and other cities in Colorado.

“LoHi, Highlands, Cherry Creek could use services like this,” Mourtada said.

The company provides tours around the city, neighborhood circulators, free rides downtown and can be hired for private events.

Sister company eTuk USA manufactures and distributes the tuk tuks, which are more common in other countries like Guatemala, where founders Walid Mourtada, Colin Sommer and Michael Fox got the idea. Since starting in 2015, they have sold 76 vehicles in 23 states and 38 cities.

The eTuks, which have a max speed of 25 miles per hour, are modified for commercial use as food trucks, hotel house cars and airport shuttles. Commercial tuk tuks run between $20,000 to $25,000, and a passenger version that seats six starts at $18,000.

Denver-made eTuks can be found on the corporate campuses of eBay and Google, selling food in Yellowstone National Park and roaming around Denver vending food from Rosenberg’s, Caribou Coffee and Einstein Bros. Bagels, and gelato from Boulder-based Dig It.

The tuk tuk -- a three-wheeled, electric rig shuttling Denverites around RiNo and LoDo -- is starting a free shuttle route on Broadway from the Alameda light rail station to Third Avenue.