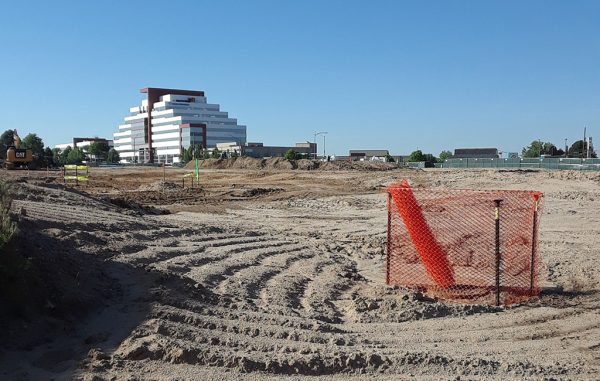 Seven acres were razed on the northeast corner of Iliff Avenue and Parker Road. (Lynn Yen)

A busy corner on the border of Denver and Aurora is getting refreshed.

“It has just gotten tired,” said Bill Asbury, VP of PAR Equities IV Inc., which owns the land. “The (US) Bank building was an old style. It was just time to do something different there.”

Asbury said PAR Equities IV has owned a plot of land on the corner since 1975 and has slowly acquired neighboring parcels.

The corner previously housed a US Bank, Caldonia’s Roadside Barbeque and an old house used for storage.

Four buildings will rise on the lot, which covers most of the block. A Murphy USA gas station, Bubba’s 33 restaurant, Arby’s and Caribou Coffee & Einstein Bros Bagels have signed leases. There is 6,800 square feet of space still available, Mike DePalma of SullivanHayes Brokerage said.

The project will cost between $3.5 million and $4 million, Asbury said. Financing is coming from PAR Equities IV. The company also applied for economic development funds from the city of Aurora.

Par Equities IV is co-developing the project with Evergreen Devco, and working with Mortenson for construction and Galloway and GreenbergFarrow for architecture and engineering.

Seven acres were razed on the northeast corner of Iliff Avenue and Parker Road. (Lynn Yen)