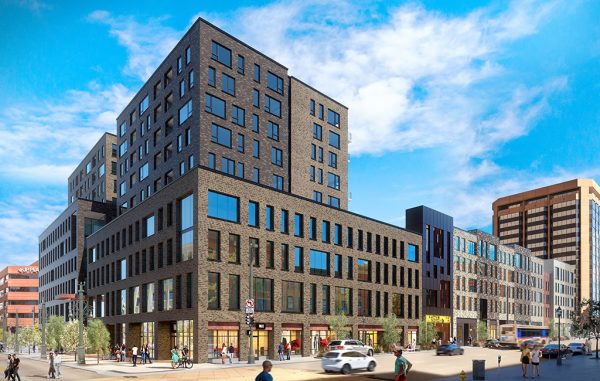 A rendering of Market Station, which will include 225 apartments and office and retail space. (BOKA Powell)

The redevelopment of an abandoned transit hub in LoDo is coming into focus.

Continuum Partners is preparing to break ground in August on a mixed-use complex on one of the last 2-acre parcels of downtown available for redevelopment.

Renderings released this week by architecture firm BOKA Powell show what will replace the one-time underground bus station at Market and 16th streets. A view from the corner of 16th and Market streets shows retail wrapping the first floor of the complex and apartments rising 10 stories toward the center of the parcel, where today there is mostly open space.

Continuum dubbed the project Market Station. It will include 225 apartments, 98,500 square feet of office space and 88,500 square feet of retail. The firm is installing a mechanical stacking system in the underground parking garage to fit 330 vehicles.

Cardinal Group has signed on to lease the apartments, according to the project’s website. Continuum is keeping retail and office leasing in house, with Stephen Fouhy and Dan Murphy, respectively.

It bought the property from the city for $14.5 million in December 2015. The site is bounded by 16th, Market, 17th and Blake streets – nearly the full block, except for the RTD headquarters at 1600 Blake.

A rendering of Market Station, which will include 225 apartments and office and retail space. (BOKA Powell)

The company is preparing to break ground in August on a mixed-use complex on one of the last 2-acre parcels of downtown available for redevelopment.