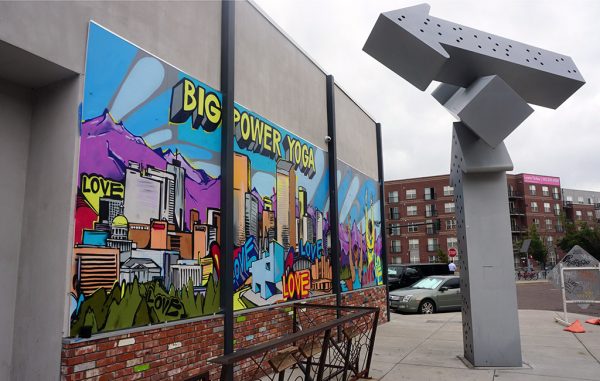 Big Power Yoga is opening its first location outside of Houston at 2470 Broadway in RiNo. (Kate Tracy)

A new yoga studio is poised to pose in RiNo.

Laura Rust and Nancy Perry, co-founders of Big Power Yoga in Houston, are opening a 2,550-square-foot yoga studio at 2470 Broadway in early August. The studio specializes in a style of yoga called Baptiste.

“When we came to Denver, we drove through the different neighborhoods and we were immediately hooked on RiNo just because it’s so artsy and energetic,” said Rust, 30. “A lot of self-expression that you see in the different businesses and people really fits with our brand.”

Rust and Perry started Big Power Yoga in 2012 after going through yoga teacher training together in Houston. Rust has a background in accounting, working at PricewaterhouseCoopers before getting hooked on yoga.

The company has since expanded to two Houston locations and added three more branches to its business: yoga retreats, stand-up paddle boarding yoga and a leadership development program. It employs 21 people and more than 50 yoga teachers.

Perry is staying in Houston, while Rust has relocated to Denver to power up the new studio. The biggest draw for Rust was a lack of Baptiste yoga studios in a city with plenty of other styles of yoga.

“It’s a style that really is present in almost every major city,” Rust said. “It’s not present in Denver, and we wanted to create it.”

Baptiste yoga was started by San Francisco yogi Walt Baptiste in the 1940s. Rust said classes start with sun salutations, then move into a series of poses meant to get cardio and strength exercises into the workout. To up the ante, Big Power studios are heated to 95 degrees.

“It’s definitely one of, if not the most challenging styles of yoga,” Rust said.

On its website, the Baptiste Institute lists one other studio practicing Baptiste yoga in the metro area: Container Collective Yoga and Bikes in Lakewood. RiNo is home to other styles, including Ashtanga Yoga Denver at 2501 Larimer St. and RiNo Yoga Social at 3101 Walnut St.

Big Power Yoga signed a 60-month lease from Fuller Real Estate with a value of $415,000, according to Fuller. Rust hired Bradley Construction and Able Design Group to turn the space into a studio, as well as three yoga instructors to help lead four to five classes per day. She is funding the expansion through profits from current studios.

Rust said monthly memberships cost $110 per month, discounting the price to $40 for the first month.

“We get people anywhere from 12 years to 70 years old,” she said. “I imagine, in RiNo, it’ll be a lot of 30-somethings. We actually get a lot of guys, a much higher percentage than other studios I’ve been to.”

“In the next couple of years, we’ll have at least two more Big Power Yoga locations,” she said. “I would love for one (more) to be in Denver.”

Big Power Yoga is opening its first location outside of Houston at 2470 Broadway in RiNo. (Kate Tracy)

For their third outpost, the co-founders of Big Power Yoga in Houston are opening a 2,550-square-foot studio at 2470 Broadway in early August.