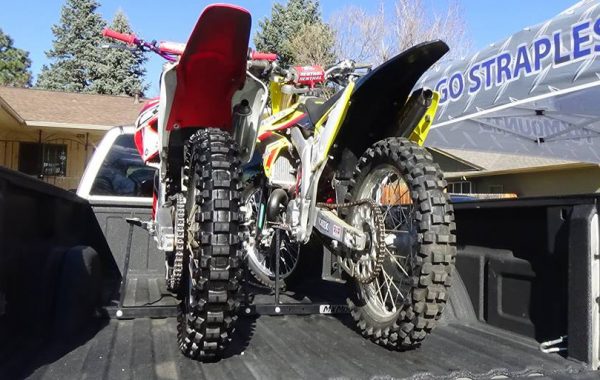 Dirt bikes are designed to withstand off-road adventures. Just not when they’re strapped to a flatbed truck.

For Scott Sutton, owner of Arvada-based MX Mounts, paranoia that his dirt bikes and motorcycles would topple over in the back of his truck left him checking his rearview mirror every few minutes and pulling over to adjust the straps when, inevitably, the bikes went sideways.

That’s why he designed a motorcycle mount that doesn’t require any straps at all. The device was granted a patent last month.

“I’ve been riding motorcycles my whole life,” said Sutton, a carpenter. “On and off for 30 years, I’ve been making different versions of this to try to make it better.”

The Harley and motocross rider became more serious about his idea 15 months ago, when he perfected the design over thousands of miles of test drives.

Sutton invented a steel framework that bolts into the bed of a truck, RV or truck trailer. Two metal rods rotate up from the frame and attach through the foot pedals of a dirt bike, enabling the motorcycle to stand securely without straps. Sutton said the system saves time for motorcyclists loading and unloading their bikes. He says getting the bike on the mount takes seconds.

“I did hundreds of miles of dirt, four-wheel driving and 15,000 miles of road testing,” Sutton said. “I made sure it was bulletproof. I haven’t had one complaint after all (I have) sold.”

Last month, Sutton received the patent for MX Mounts, which cost him $10,000. This year, he’s sold 600 to motorcycle owners, which has enabled him to pursue MX Mounts full time. Last year, he sold between 100 and 150 mounts.

Sutton said another company, North Carolina-based Risk Racing, also has developed a strapless system for transporting motorcycles. However, he said MX Mounts is about $60 cheaper for a mount that holds just one bike, and are lockable to prevent robberies.

“It’s the one thing that no one knows about,” Sutton said. “I guess I’m selling it cheap until everyone finds out about it.” 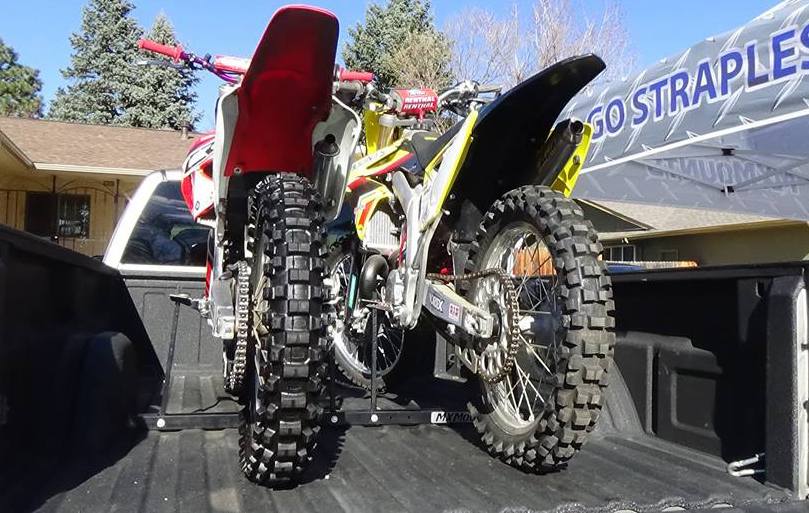 Dirt bikes are designed to withstand off-road adventures. Just not when they're strapped to a flatbed truck.