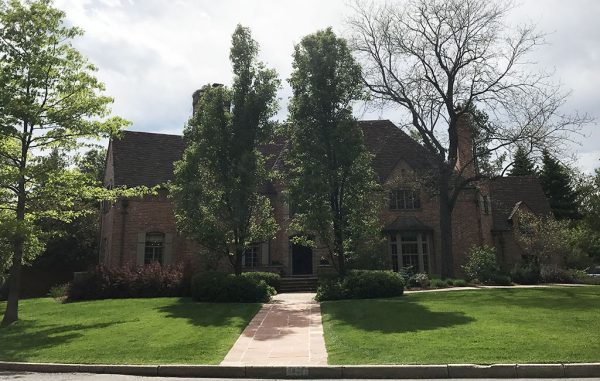 A home with a storied past in Denver’s film culture is ready for its next stage.

Robert Doherty and Karen Onderko have listed their 8,134-square-foot mansion at 401 Race St. in Denver’s Country Club neighborhood for $5.25 million.

“He was famous for being the first person to sell popcorn at the movies,” Armstrong said. According to the Colorado Business Hall of Fame, Ricketson’s idea of serving popcorn at his Denver theaters helped the film industry survive during the Depression.

Ricketson’s Tudor home, built in 1933, is fitting for an owner who played a role in creating a thriving film culture in Denver: His library features a secret shelf that rolls back to reveal a Prohibition-era liquor room, and the home’s third level features a 500-square-foot movie theater with a stage and old movie projector.

“He would put velvet ropes out the front of the house and the neighbors used to come over for movies,” Armstrong said.

The home continued to be a landmark of Denver’s film culture. Armstrong said Gov. John Hickenlooper used its backyard to present director John Sayles a key to the city for Sayles’ 2004 film “Silver City,” which was filmed in Colorado.

“It is a landmark home,” Armstrong said. “It’s one that everyone notices … it sits on its own block.”

Armstrong said her favorite room in the house is the “sunken” library, where guests walk down steps to a wood-paneled space with the secret Prohibition room.

“The ceilings are high, but yet it’s really cozy because of the paneling and the marketplace,” she said. “So many things can be done in that room.”

On the first floor, nearly every room contains doors that lead outside, where two patios open out to guests.

Outside, the home sits on a third of an acre, with built-in benches made out of the same stone as the house, Armstrong said.

Owners Robert Doherty and Karen Onderko purchased the home in 2003 for $2.45 million, according to Denver property records. Onderko has served on the board of directors of the Denver Film Society, while Doherty is the chief financial officer at Ensyn Corp., according to his LinkedIn page.

The 8,134-square-foot mansion at 401 Race St. was built in 1933 and occupied by Denver film legend Frank Ricketson.