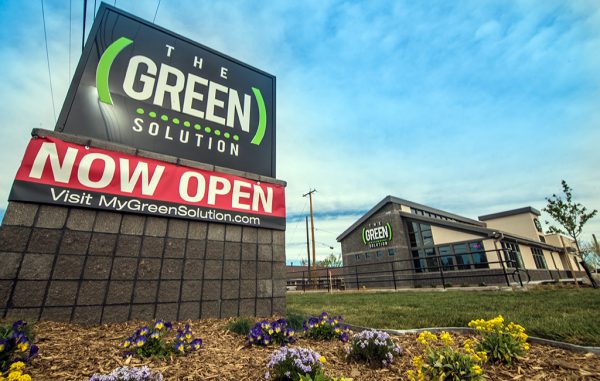 Marijuana chain The Green Solution likes to take the long game and buy its real estate when it can. But sometimes you gotta rent.

The company, which has 12 stores in Colorado, signed a lease earlier this month for a new location in Glendale, at 4151 E. Kentucky Ave.

“We don’t just buy and promote areas that are undetermined or don’t really have any future. We really want to create a sustainable product and a sustainable store that’s going to grow with us for a long time,” co-founder and co-CEO Kyle Speidell said. “Our goal is not to be here in 10 years, but to be here in a century.”

The chain owns a patch of Union Station real estate, where it’s building a store.

The Union Station and Glendale shops are scheduled to open by the end of summer. The company also is adding stores in Pueblo, Fort Collins and Trinidad, Speidell said, as well as two locations in Aurora.

Speidell said he wants to open four to six stores per year.

In larger cities like Denver and Aurora, other stores can come in and “cannibalize” revenue, Speidell said, making it better to have stores closer together in some circumstances.

The company also looks into areas that have low license caps. The new location in Pueblo will hold one of eight licenses allowed in the city.

Speidell said the firm has 300,000 square feet dedicated to growth and production in Denver, and is looking to add an additional 1 million square feet.

The Green Solution, which has 12 stores in Colorado, signed a lease earlier this month for a new location in Glendale, at 4151 E. Kentucky Ave.