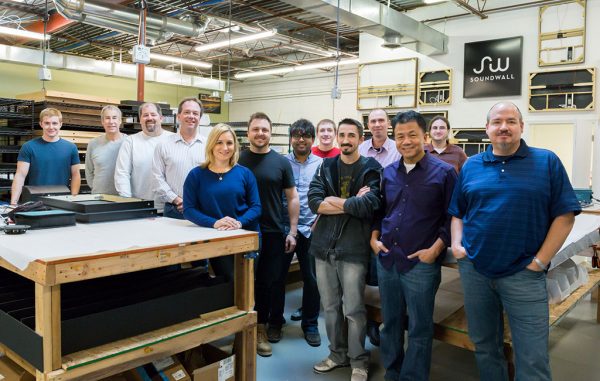 Soundwall has about 10 employees, and has so far raised $10 million from investors. (Soundwall)

Soundwall has had music-playing artwork ready for consumers for about 18 months, and the company just added $625,000 in funding to the $10 million it already raised, according to SEC filings.

“(The funding) is going to be in support of expanding into targeting these enterprise circles, particularly verticals in hospitality and assisted living,” President Adam Goodman said.

Soundwall features artwork from Boulder resident Will Day and other artists that are printed on large magnetic sheets. The speaker system vibrates sound behind the entire piece of art. Soundwall artwork connects to an electrical outlet, while users stream their music through the piece by connecting to via Wi-Fi or Bluetooth.

Soundwall’s Nova product also has touch capabilities and motion sensors that allow users to control music by touching the art, or control the backlights by walking.

“Bottom line, we’re on a mission to fill the world with smart, beautiful speakers,” Goodman said. “We’re a computer sitting behind this beautiful piece of art.”

“The residents are demanding a certain level of convenience,” Goodman said. “They’ve been used to living with iPhones … there are a huge amount of baby boomers who are converting into that market soon.”

In hotels and assisted-living facilities, Goodman said he won’t sell just one Soundwall per client, but instead for each room in the facilities.

“On the hotel front, there is a big push toward bringing your own content into rooms: your own phones, music, TV shows,” he said. “Hotels are moving toward reflecting the personality of the space … Soundwall features local artwork.” 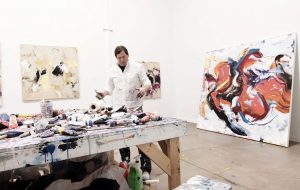 Boulder-based artist Will Day paints in the firm’s studio. (Soundwall)

Goodman started on the company’s sales team a year ago and became president of the startup a few weeks ago. Soundwall employs 10 people at its 4,000-square-foot production facility at 530 Compton St. in Broomfield, where it can produce about 300 Soundwalls per month. Founder David Hose started the company in 2013, and has raised more than $10 million in funding to date, according to SEC filings.

Soundwall is looking for $1 million in its current funding round, which opened May 11 and has garnered four investors so far.

Soundwall products cost between $500 to $900, depending on the size and capabilities of the artwork. The startup sells online and through five U.S. art dealers and three global dealers in Vietnam, Korea and Dubai. In addition, luxury hotel supplier American Hotel Register Co. recently brought on Soundwall as one of its globally sold products.

“With the focus on enterprise space, we are starting to see more bulk sales through hotels and assisted living,” Goodman said. “It is the focus right now … the response to our technology has been so strong through those channels.”

Soundwall currently is working on additional technology for its artwork, including two-way communication and artificial intelligence features.

Soundwall has about 10 employees, and has so far raised $10 million from investors. (Soundwall)

The capital brings its investment total to $10 million as it looks for buyers at hotels and assisted-living facilities.