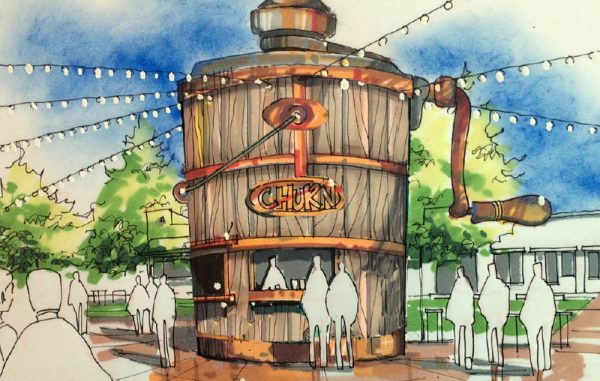 A rendering of the planned 22-foot kiosk in Fort Collins. (Little Man)

The LoHi ice cream icon is scooping up outposts in Stapleton and Fort Collins; each set to open a decade after founder Paul Tamburello put a 28-foot ice cream can at West 30th Avenue and Tejon Street.

“About three years ago, we decided that we just had so many opportunities to (expand), but we didn’t want to just replicate Little Man,” Tamburello said, adding that he’s regularly approached by brokers and developers who want Little Man in their projects. “We think that the thing that destroys special is familiar.” 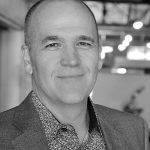 Little Man operations head Loren Martinez said he and Tamburello wouldn’t serve up another ice cream can, even if they could get another one fabricated.

“The analogy that I use is the big blue bear at the Convention Center,” Martinez said. “It’s unique.”

Instead, the pair is dreaming up more one-of-a-kind ice cream shops. In Fort Collins, they are planning a 22-foot tall kiosk in the shape of a hand-churned ice cream bucket. And the ice cream men are tuning up an airplane wing replica to operate in Stapleton.

Little Man will be the anchor tenant at The Exchange in Fort Collins, a $9 million mixed-use redevelopment of a full city block on North College Avenue. Developer Brinkman Colorado broke ground on the site two weeks ago and plans to open in 2018, Brinkman owner Joshua Guernsey said.

The ice cream company hired Ian Shuff of Fort Collins-based Alm2s Architects to design the shop, which it tentatively is calling Churn. It has not yet hired a general contractor, Martinez said.

Stapleton will add yet another flavor to the company’s lineup.

There, Little Man plans to put a kiosk in the middle of the Eastbridge Town Center plaza. In homage to the neighborhood’s history of aviation, the kiosk will have a replica of a mid-century Lockheed Constellation commuter jet wing for its roof.

The anticipated opening for the project, Constellation, is fall 2017. Martinez said the wing is under construction in Mexico. He expects that Spectrum General Contractors will break ground on site in Eastbridge within a month, working off of a kiosk design by Michael Koch Architect. 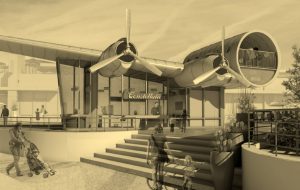 The Stapleton kiosk will have a mid-century commuter jet wing replica for its roof. (Little Man)

The Fort Collins and Stapleton outposts will be Little Man’s fourth and fifth. Sweet Cooie’s on East 12th Avenue in Congress Park opened in February.

The key ingredient feeding Little Man’s retail growth is a new bakery and ice cream-making facility set to open by the end of summer on West Colfax Avenue. That facility also sells ice cream, and is the third spot to get a frosty treat.

Martinez said that 6,500-square-foot space – more than eight times the size of its current production site in LoHi – will put Little Man products on upwards of 350 menus from its current 35 to 40 wholesale customers.

“We’ll be able to make 10 times the amount of production we’re doing now,” Martinez said. “We have different restaurants approach us almost weekly wanting to get our product on their menus. And we’re just at capacity.”

And the firm isn’t done with the growth spurt. Tamburello said he is negotiating a lease in Park Hill.

A rendering of the planned 22-foot kiosk in Fort Collins. (Little Man)

The LoHi ice cream icon is scooping up two new outposts a decade after founder Paul Tamburello put a 28-foot ice cream can at West 30th Avenue and Tejon Street.