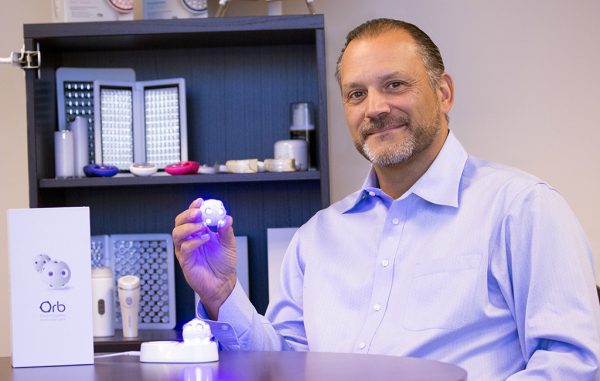 It may look more like something that belongs in “Star Wars,” but a Denver company says its new pingpong ball-sized device can kill germs, purify water and make shoes less stinky.

The Orb, a waterproof ball that emits UV light to kill mold, bacteria and fungus, completed a successful Kickstarter campaign by raising more than $28,000. The company behind the product, LED Technologies, will use the funds to make its first production run of Orbs.

“We used the Kickstarter to gauge consumer response,” CEO Lloyd Nelson said. “We were going to make the product anyway … it was very much a strategic and tactical plan to go out and do some very beginning research.”

Nelson, a Southern California native, said his inspiration for creating the Orb came from living in Colorado’s dry climate.

“We use humidifiers all the time,” he said. “I was really getting sick and tired of all the mold and algae that gets into the humidifier.”

As the leader of a company that uses UV light therapy for injuries and skincare products, Nelson figured he could make something small but powerful enough to clean his humidifiers.

“As we built the device, we realized all the different types of activities you could use it for … one thing after another kept snowballing,” Nelson said.

The Orb’s UV light penetrates the DNA of small cell organisms like fungus and bacteria and damages or kills the cells. The dosage is low enough to be safe for humans, Nelson said. Besides humidifiers, Nelson thinks the Orb can kill germs in gym lockers, shoes and backpacks, among other uses.

Nelson said the Orb is the company’s first of five consumer products. The others, which he will start manufacturing from July through early 2018, include a UV shoe insert to keep shoes odorless, a UV kitchen mat that kills harmful food bacteria, a work lamp that mimics the sun’s rays, and refrigerator lights.

It may look more like something that belongs in "Star Wars," but a Denver company says its new pingpong ball-sized device can kill germs, purify water and make shoes less stinky.