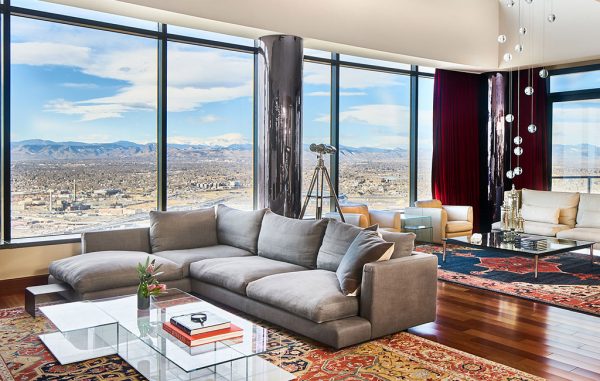 There’s downtown condos. And then there’s this.

A 6,800-square-foot penthouse on two top floors in the Four Seasons hit the market for $13 million. The palatial living space has three bedrooms and five bathrooms, an outdoor hot tub and fire place.

Listing agent Stan Kniss with Slate Real Estate Advisors said the penthouse has been on the market for a month.

“I think it is unmatched in Denver right now and will very likely never be duplicated again,” Kniss said. “To have something that size, that high up, with those views, that’s what makes it special.”

Property records show the penthouse was sold in 2011 for $6.6 million. The current owner is an LLC that public records show traces back to Dan Wolf, who manages real estate for Four Seasons investor Salomon Juan Marcos Villareal.

Marcos is the CEO of Mexican apparel company Grupo Denim and developed Beaver Creek’s Ritz-Carlton, according to his LinkedIn profile. Villareal’s name is also on loan documents tied to the LLC that purchased the penthouse.

John Carney of Jackson Hole-based Carney, Logan and Burke Architects designed both the penthouse and the entire Four Seasons hotel, which opened in 2010.

The penthouse’s amenities include access to the hotel’s house phone, where 300 hotel staff carry out every wish.

“That’s what you don’t get at any place in town,” Kniss said. “There is a staff downstairs that knows exactly who you are as the owner of the penthouse.”

That room service for the penthouse comes with $6,120 per month in HOA fees.

The penthouse has 750 square feet on its two balconies, which include a hot tub, fireplace and built-in heaters.

“I think the outdoor living is about as amazing as it comes,” Kniss said. “The other thing that I really love is there’s a very sleek two-story staircase. It’s a work of art on its own.”