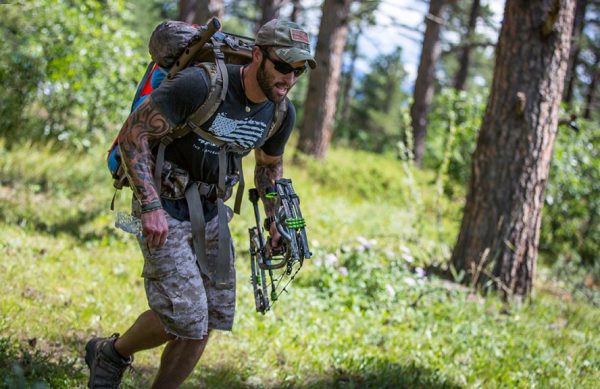 As if flipping tires and popping burpees isn’t hard enough, a competition coming to Colorado this summer tasks participants with slinging bows and arrows, too.

The Train to Hunt Challenge, a race that intersperses CrossFit-inspired obstacles with target shooting, will host regional and national competitions in Grand Junction this June and July.

This year marks the return of Train to Hunt to the Centennial State. Kenton Clairmont, the Idaho-based personal trainer who founded the competition, said the national competition is back in Colorado for the third time after a detour to Salt Lake City for the 2016 games.

“We could not beat the turnout in Colorado. The state of Colorado is a real hub for what I would say is the hunting athlete,” he said, people who practice shooting and like to work out in preparation for hunting season.

The Train to Hunt race course at Grand Junction’s Powderhorn ski resort will take competitors through a series of physical challenges – dragging tires, hauling sandbags, jumping over boxes or jumping into burpees – and then ask them to steady their muscles enough to take aim at targets. The goal is to complete the course in the fastest time and to avoid time penalties for poor shots. Clairmont said most competitors will complete the course in 30 to 40 minutes.

Train to Hunt regional qualifiers will be held on June 24 at 10 locations around the country, including Powderhorn. The fittest archers will then try to out-aim and out-run each other at the national competition at Powderhorn on July 8 and 9.

The entrance fee to compete is $100; spectators can watch for free. Clairmont expects the national championship to draw at least 150 participants, not counting spectators, and will use a slice of entry fee revenue to pay Powderhorn.

Clairmont, who modeled the competition after the workout sessions he runs for hunters in Idaho, said the first Train to Hunt competition in Boise attracted just 40 competitors in 2010. He said this year it’s on target to hit 1,000 nationwide.

As if flipping tires and popping burpees isn't hard enough, a competition coming to Colorado this summer tasks participants with slinging bows and arrows, too.