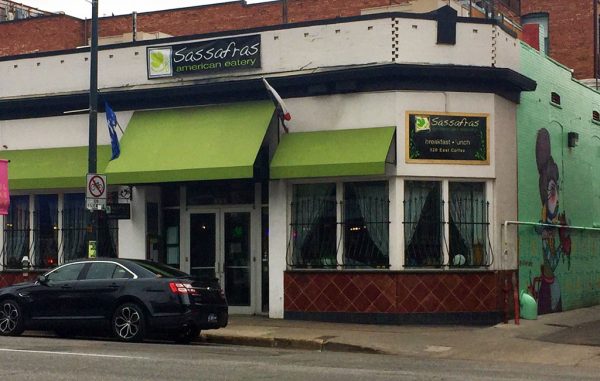 A Sassafras location on Colfax Avenue in Denver. (Amy DiPierro)

Breakfast and lunch spot Sassafras American Eatery, which got its start in Jefferson Park five years ago and expanded to Colfax Avenue in 2014, is preparing to open a third location in downtown Golden within a month.

Co-owner Julia Grother said she was looking for space in Golden for two years before coming across 1027 Washington Ave., a storefront overlooking Clear Creek and across the street from the Golden Hotel.

“I’ve always liked Golden,” Grother said. “It’s a really neat town and we wanted to go west a little bit. I’m sure that we’ll be able to capture the feeling of the other two stores in a different community.”

The space didn’t need major renovations, she said, since previously was occupied by a Mediterranean restaurant and a Mexican cantina.

The new location will share a menu with the Sassafras restaurants in Denver, Grother said. She also hopes to reserve an 800-square-foot corner of the space, which has a separate entrance, as a retail store for jams, sauces and house-made bacon, as well as grab-and-go items like beignets and meat pies.

“Because of the natural layout of the space, we thought that it would be perfect to come in and get a café au lait and buy some bacon and bread,” Grother said.

Grother said base rent at the 5,000-square-foot Golden storefront, which seats 48 people outside on its porch and 90 inside, is $10,000.  The location is applying for a liquor license and waiting on other permits, she added.

Grother opened the first Sassafras in 2012 at 2637 W. 26th Ave., the original location of La Loma. She co-owns the restaurants with Richard Stewart and chef Colin Mallet.

A Sassafras location on Colfax Avenue in Denver. (Amy DiPierro)

A breakfast and lunch spot that launched in Jefferson Park five years ago and expanded to Colfax Avenue in 2014 is preparing to open a third location in Golden within a month.