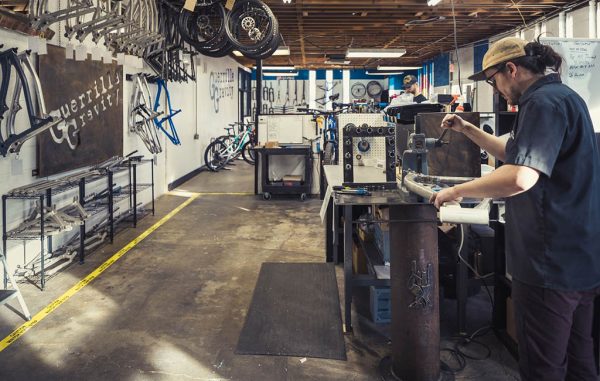 Guerilla expanded into another 1,000 square feet next to its shop at 2031 Bryant St. (Guerilla Gravity)

After five years fighting for a toehold in the mountain bike industry, a Denver brand is expanding its local presence with more production space and a new line of bikes.

In January, Guerrilla Gravity, located near the Broncos stadium at 2031 Bryant St., took over another 1,000 square feet next door.

“We’ve pretty much doubled production from this year versus last year,” co-owner Kristy Anderson said. “We are definitely seeing an increasing demand for production.”

Anderson said she boosted output from 20 to 40 bikes per month.

She said the company will lease another 2,000 square feet from the same location in a year.

And Guerrilla Gravity keeps tweaking its product lineup. It introduced two bike models last spring and summer, followed by a new model this February, bringing the company’s total to five. The newest, the Megatrail SS, has a climb switch to adjust it for climbing or descending.

“Here on the Front Range there is a lot of climbing, but when you get to the top of a partial trail, the Megatrail has that function of being able to go back and forth between two different modes,” Anderson said. 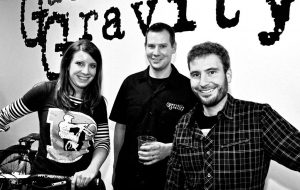 To fund the expansions, Guerrilla received a $100,000 grant from Chase Bank and a $30,000 grant from the City of Denver 18 months ago, which allowed it to buy new tooling and increase sales. Anderson said Guerrilla has funded the new bike model and lease through revenue.

Anderson started Guerrilla Gravity in 2011 with Matt Giaraffa and Will Montague, who all used to ride downhill mountain bikes together.

The three had diverse work experience: Giaraffa as a mechanical engineer who previously designed race cars, Montague in startups and Anderson in medical sales and as the co-owner of Onus IV Hydration. They shared a desire for American-made mountain bikes that weren’t overly expensive, so they pooled funds to start welding bike frames in a garage.

“Mountain bikes are increasingly expensive and it’s hard for a lot of people to be able to afford a good-quality bike,” Anderson said.

Guerrilla’s Denver-made frames range from $900 to $2,100, and Guerrilla riders can request different shock, brake and other components to build their bikes out from there. The firm sells directly to riders. 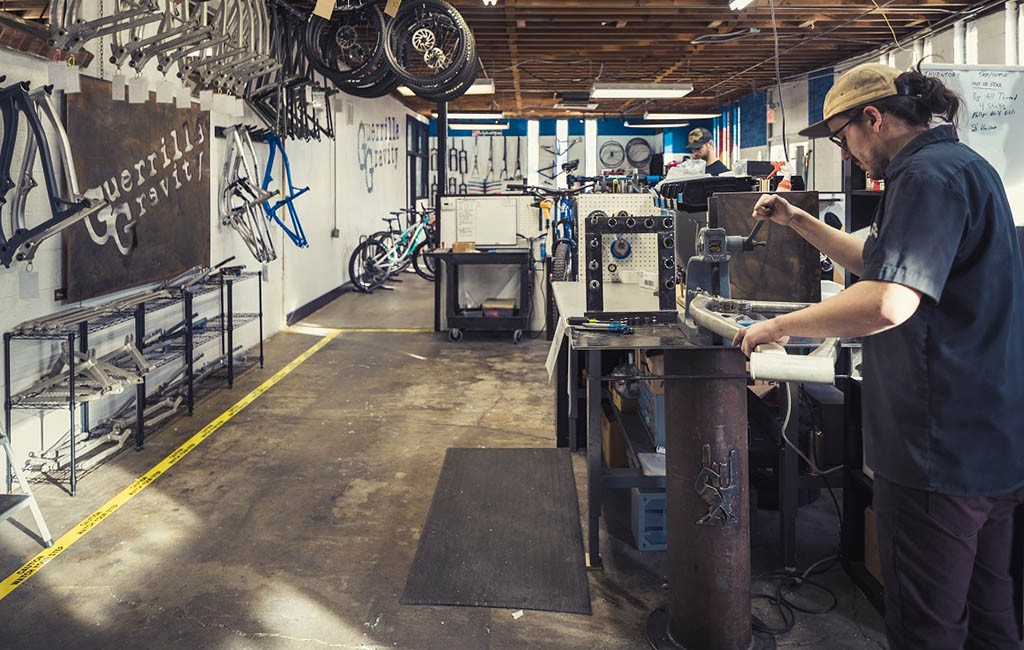 Guerilla expanded into another 1,000 square feet next to its shop at 2031 Bryant St. (Guerilla Gravity)

After five years fighting for a toehold in the mountain bike industry, a Denver brand is expanding its local presence with more production space and a new line of bikes.