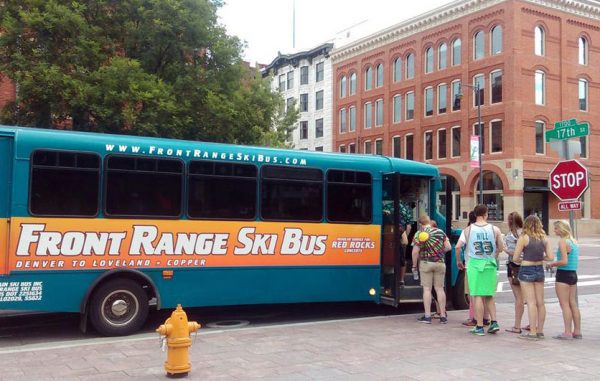 For the winter and early spring, Jeff Buxton was an entrepreneur conflicted.

After sinking five years into the Front Range Ski Bus, eventually building up to three shuttle buses that ferried 380 passengers a month to Loveland and Copper, Buxton dreamed of steering another $300,000 into more mini-coaches. He said he could make a profit and help relieve worsening Interstate 70 traffic.

This week he reversed course. The reason: Colorado Department of Transportation started testing a pilot program called Snowstang, running a coach bus from Denver to Summit County that has spooked him like engine backfiring.

For Front Range Ski Bus to grow, Buxton needed to purchase two buses to service Breckenridge and Keystone, which he says are desirable resorts for many of his customers. But with Snowstang, customers would ride a bigger, newer bus with WiFi and bathrooms to those same two resorts – for the same price.

“CDOT didn’t care that we had substantial concerns about them doing this,” Buxton said. “The issue is that they can go back at any time and put us out of business.”

Mike Timlin, the bus operations manager for CDOT, said the state’s goal was to see if it could break even.

“We learned a lot from it,” Timlin said. “Some of the feedback we got was it was just too expensive.”

CDOT did not break even, Timlin said, as the 51-seat Snowstang buses weren’t close to capacity.

Meanwhile, Snowstang’s future is still up in the air as the transportation commission and CDOT executives decide whether the concept is viable.

“If I were a betting man, I think we’d probably hold off and not do it next year. That’s just my gut feeling,” Timlin said.

“Because of our tests and the chances that we’ll resurrect Snowstang next year … I don’t think we would pose a threat to him,” Timlin said. “We have invited him right from the get-go to all of our meetings. We’ve attempted at every stage to engage him.”

One-third of Buxton’s business, which launched in December 2011, comes from taking skiers to Copper Mountain and Loveland, which costs $45 for a round trip. The other two-thirds come from charters to Colorado destinations and Red Rocks concert shuttles.

It hasn’t always been pretty, but Buxton and Stokes have managed to turn the bus service into a profitable enterprise for three years.

“Transportation is a bitch,” Buxton said. “There is nothing glitzy about a bus. You can put the lipstick on a pig, but there’s nothing glamorous about it.”

Buxton, 62, moved to Denver in 2010 from Spokane, Washington, and said the need for more transportation options to the mountains led him to the Front Range Ski Bus.

Buxton was teaching an entrepreneurship class in 2010 when his student, Andy Stokes, presented him with an idea he couldn’t pass up: running a 15-passenger bus service to Colorado ski resorts.

Buxton’s only experience in transportation was indirect, as a commercial underwriter at Safeco for 10 years, where he learned about insurance for equipment maintenance, vehicle accidents and licensing for drivers.

"CDOT didn't care that we had substantial concerns about them doing this," shuttle bus owner Jeff Buxton said. "The issue is that they can go back at any time and put us out of business."