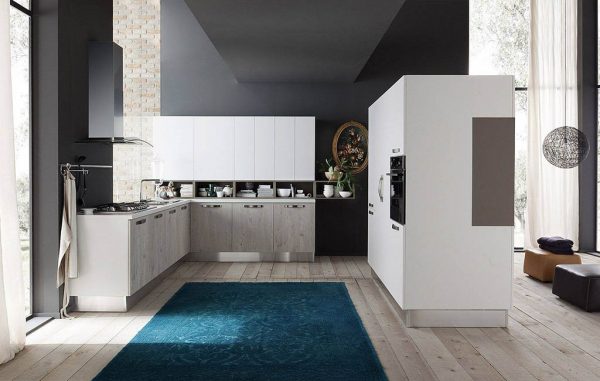 New Box plans to open a new showroom in RiNo in May. (Courtesy New Box)

To take advantage of the Front Range building boom, a Vail Valley-based importer of European cabinets, floors and doors is sanding off a new showroom in RiNo.

Craig Birk and Jason Propst met in 1991 and went into business together under the name New Box in 2014. Propst is a former general contractor and had become acquainted with mill owners while living in Italy. Birk, whose family has installed hardwood floors for generations, had contacts at Austrian flooring companies.

The pair thought opening a retail storefront and becoming the direct dealer of certain Italian and Austrian brands, they could charge lower prices than other general contractors. And it worked.

“The retail side of it took off so much,” Propst said, “that we dropped the general contractor portion of it.”

Now, bolstered by a $300,000 Small Business Administration loan, New Box has leased 2,000 square feet at 33rd and Larimer for its second display space. The shop looks to open in May pending the arrival of merchandise from overseas.

With plenty construction from Denver up to Fort Collins, New Box has hired Richard Miller to be its point person on the Front Range. Miller sees RiNo as a central spot for furniture shoppers looking to trim a house in a single afternoon.

“For a customer to drive over into RiNo, if they’re shopping around, there’s an opportunity for them to see lots of businesses that are similar to ours,” Miller said.

A developer working with Oz Architecture, for example, is just a few blocks to the New Box showroom. A couple blocks in the opposite direction on Larimer, they could buy custom furniture at Bryan Trybus Designs or the AND Collaborative in Backyard on Blake.

Propst spent four years in Italy, attending trade shows to meet vendors. The five-person business typically rents out shipping containers and sends them to its job sites, primarily in Eagle and Summit counties, where New Box often installs the product itself. New Box co-founder Birk said cutting out middlemen has been a profitable strategy.

Project size varies by customer. Sometimes a builder or architect hires the firm for multi-family jobs with budgets over $1 million, Birk said, and sometimes the customer is a homeowner remodeling his kitchen.

In Denver, New Box won’t have to compete with the mountains for foot traffic. The business encourages customers visiting its website to visit its Edwards showroom “in between your ski runs, hikes, white water rafting trips.”

New Box plans to open a new showroom in RiNo in May. (Courtesy New Box)

To take advantage of the Front Range building boom, a Vail Valley-based importer of European cabinets, floors and doors is sanding off a new showroom in RiNo.