It shouldn’t take a parent four hours to find a babysitter.

That’s what Kristen Stiles decided when she launched Sitter, a Boulder-based app to help parents schedule and pay babysitters. The startup just raised $817,000, according to an SEC filing last month.

“We raised the money so we can accelerate that growth … the goal is to get Sitter in the hands of as many parents in the U.S. as possible,” Stiles said, adding that the app is being used by customers in all 50 states.

As a working mom, the 38-year-old was tired of texting multiple babysitters to see who could watch her two boys, ages 9 and 4. Through Sitter, parents can request a date and time for babysitters on the app or online at Sitter.me. The first person to respond gets the job.

Sitter also works as a social network, so friends and family can refer babysitters they trust, Stiles said. And parents can pay sitters by entering their credit card number in the app.

“It’s such a pain at the end of the night to do the math or hit the ATM,” Stiles said. 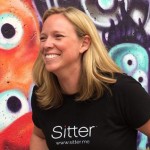 Stiles, a Colorado native, started Sitter with Matt Stueve in December 2014, and they launched the app in May 2015. Before Sitter, Stiles was a developer for Hewlett-Packard, an IT manager at Vail Resorts.

Sitter has three full-time employees and one part-time employee, as well as Stiles’ husband, Dan Stiles, who handles legal matters.

Sitter was one of five Colorado startups to join Boulder’s Techstars accelerator program this spring.

Investors in this fundraising round include a slew of Colorado firms, Stiles said. Techstars, MergeLane, Batshit Crazy Ventures, Rockies Venture Club, the Kokopelli Capital Fund and local angel investors all chipped in.

“They had a vision birthed out of a pain point based on their own lives,” Kokopelli co-founder Cory Finney said. “Seeing that it resonated with people from all sorts of backgrounds, Sitter was an opportunity to invest in that solution. They have the branding and expertise to stand out against their competition.”

While websites and apps like Care.com help parents coordinate babysitters, Stiles said her app relies on a parent’s existing network of friends and sitters.

“The rest of the industry is really focused on helping you find strangers,” Stiles said. “Nobody out there allows you to manage a team of sitters … that you and your friends already trust and love.”

The startup's app allows parents to find and refer available babysitters in their network, schedule hours and make digital payments.