Stem Ciders plans to build a $7 million restaurant, taproom and production facility on a four-acre plot in Lafayette — complete with its own apple orchard.

The cidery, which will keep fermenting and pouring at the RiNo taproom it opened in 2014, started construction on the two-story, 30,000-square foot facility Jan. 20. Its goal is to open by the fourth quarter of 2017.

“We just need space,” said the cidery’s marketing head, Courtney O’Rourke, describing how the company’s cider-making equipment spills into its RiNo taproom every morning, forcing Stem to bottle up production in time to open the taproom by 3:00 p.m. “This is a much needed expansion and we’re really excited,” she said.

A spokesperson for the city of Lafayette confirmed via email that its City Council approved Stem Ciders’ proposal three days prior to the sale. And as a deal sweetener, the cidery said, the city tossed in permit fee waivers and tax rebates totaling $183,250.

Stem’s new cidery is the culmination of a two-year search, as the startup became increasingly pressed for space in RiNo, O’Rourke said. Last year, the business produced 3,500 barrels of cider. When the Lafayette facility opens, Stem will have the capacity to make 100,000 barrels of cider annually, she said, which would mean $43 million in revenue a year. 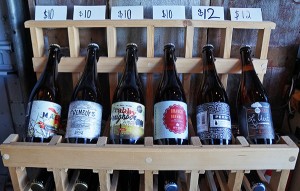 Plans for the new cidery in Lafayette’s Vista Business Park, which were designed by Boulder-based Daedalus Studio, call for a two-story building meant to resemble a barn.

In one letter included with Lafayette planning documents, the architecture firm describes Stem’s future cidery as “agrarian” in honor of “the history and roots of cider manufacturing.” An illustration of the building shows metal siding painted barn red, plus stone and woodwork.

O’Rourke said Stem will have 15,000 square feet for its offices and production space on the ground floor, with another 5,000 square feet on the second floor to house the taproom and restaurant.

“The views are just incredible,” she said.

The company also plans to have a retail space to sell packaged ciders and merchandise. That leaves 10,000 square feet of industrial space, which Stem initially plans to lease to two more tenants.

Outside, construction plans call for a patio southwest of the building, plus space for a “cider garden” and 87 parking spaces. There’s even room for a small orchard, O’Rourke said, although it will be for show and not for cider production.

Faurot Construction is the general contractor. When the restaurant and taproom open, Stem projects it will hit $1 million in sales in its first year.

That kind of volume requires more people. O’Rourke said Stem is planning to relocate 12 staff members to Lafayette, to hire five additional production staff and to bring on as many as 20 new restaurant employees.

Stem Ciders was started by Eric Foster and Phillip Kao in 2013. The company opened its Denver cider house in January 2014, first distributing kegs to Denver area companies before opening their bottled cider operation in 2015.

Stem told BusinessDen last year that it didn’t have enough room to grow in its current digs at 2811 Walnut St. To fund its expansion, the company raised at least $1.2 million from investors last year, according to a filing with the SEC.

The need to increase production grew more urgent this August, when Stem announced a deal to distribute its ciders across the state through Aurora-based Breakthru Beverage. It is working with Odell Brewing’s sales force to sell its ciders.

While most production will move to Lafayette, O’Rourke said, Stem plans to keep making smaller, experimental ciders in RiNo. It will also be able to expand its RiNo taproom into the newly vacant production area when needed.